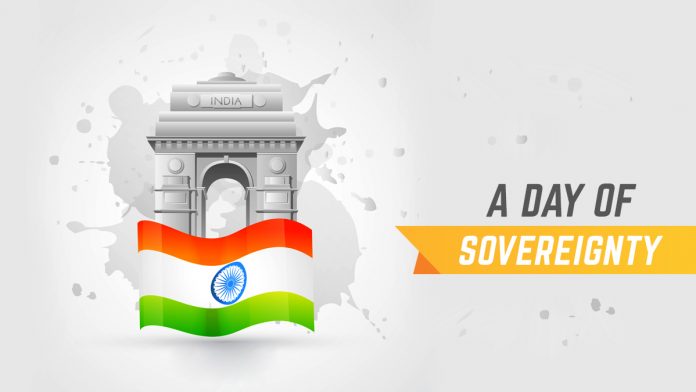 A Day of Sovereignty

January 26,1950 is a day that all of us are familiar with, because that was the day when the constitution of India came into effect. While India became independent on August 14, 1947, it didn’t have a permanent constitution and Indian laws were based on a modified version of the British-established Government of India Act 1935. However, two weeks later on 29 August 1947, a Committee was appointed for the drafting of a permanent written Constitution, with Dr B R Ambedkar as its chairman. After a lot of meticulous work and serious and long-drawn deliberations, the Constitution was finally drafted and January 26, 1950 was chosen as the day to adopt it and declare India as a sovereign republic. The significance of January 26 was that on this day in 1930, the Indian National Congress made its first Declaration of Complete Independence, opposing the British rule over India, though this aspiration took another 17 years to come to fruition.

Each year, on this day, every Indian heart is filled with patriotic vigor and immense love for the motherland. India is distinguished by its rich diversity of cultures, religions and languages. Celebrating the occasion of Republic Day, a grand parade showcasing this diversity is held in the capital of India, New Delhi, from India Gate till the historic Red Fort. Foreign heads-of-state are usually invited as the chief guests to this parade.

The Indian Constitution holds the distinction of being the world’s largest constitution with a total of 448 articles. But every constitution is under-girded and strengthened by a constitutional spirit that should be deeply ingrained in the society and polity. The vision which animates the Indian Constitution and its spirit, as laid down by the framers, is that of a society in which justice is assured for every person, especially those who are marginalized. If any of the people reading this article are Indian citizens, let us resolve this day to increasingly inculcate this constitutional spirit by being informed of our rights and duties and staying true to them. Let us be active contributors and do our bit in making India a better place for all of our fellow-beings, especially those who are less privileged than us.