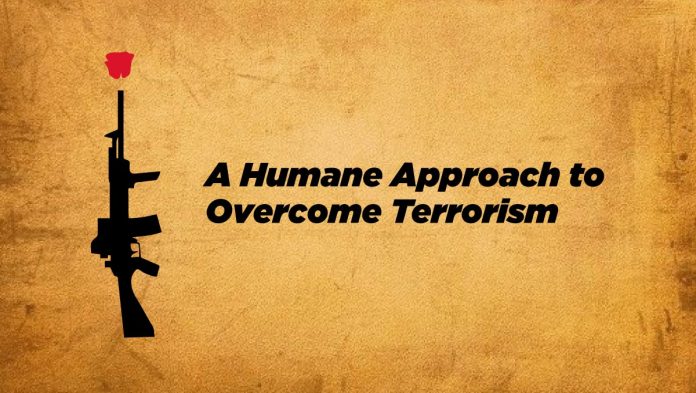 A Humane Approach to Overcome Terrorism

A Humane Approach to Overcome Terrorism

We live in such times, that rarely are days wherein news channels aren’t reporting on acts of violence or terrorism or a group gone rogue. On top of that there is a significant rise in cases of hate crimes against specific religious or ethnic groups all around the world. And truth be told, there won’t be an end to any of these if we keep blaming each other instead of taking the required action.

Each year 21st May is observed as Anti-terrorism day in India and the main objective behind observance of this day is to wean away the youth from the scourge of terrorism.

Firstly, terrorism is often taken as a law & order issue. According to those in power and civil society – people, who have gone rogue, need to be reigned in and brought in to face the consequences of justice. While it is true, it is just a part of the problem and more often than not quite the very final piece of the puzzle.

Have we ever given a thought to the other side of this whole scenario?

Like most law & order problems, we must understand that terrorism has its root in socio-economic factors, and at times in feelings of neglect, historical wrongdoing, deprivation- and so on. All of these are emotional factors which most often governments choose to solve by a logical yardstick – the firm hand of law & justice.

And that firm hand of law & justice has never quite worked. Holistically.

This is because logical solutions to emotional problems are like trying to fit a square peg, in a round hole. One can never fully and comprehensively weed out terrorism, unless one is willing to look into the socio-economic, cultural, and emotional aspects of the problems.

While it may anger some, there is a definitive reality to the fact that one man’s terrorist could well be another man’s freedom fighter. Instead of just looking at things from one perspective, it will behoove everyone to take a more comprehensive and pluralistic solution.

It is true that many hardliners have taken a firm approach to smother terrorism but often forget that the remnants are never fully removed and only remain resolved at the superficial level.

“Peace cannot be kept by force; it can only be achieved by understanding.” – Albert Einstein

And thus, we must always attempt to answer the fundamental question, why do people turn to violence? There’s often a sense of betrayal – economic, societal, regional – robbed of their lands, or opportunities, people turn to violent methods to claim what is rightfully theirs. As much as governments would treat it as a law & order situation that can be curbed with brute force, permanent solutions are only possible when we take a more broad-based, socio-economic, and people-centric approach.

Let us not forget the famous saying “An eye for an eye will make the whole world blind.”

Without finding true peace, there's no lasting meaning to comfort or success or popularity. We all strive, through the hustle...
Power-up

I Will Go On

Paul Kalanithi, a brilliant neurosurgeon, was diagnosed with Stage IV lung cancer at the age of thirty-six. One day...
Red Letters

Hiroshima day: Lest the Living Forget