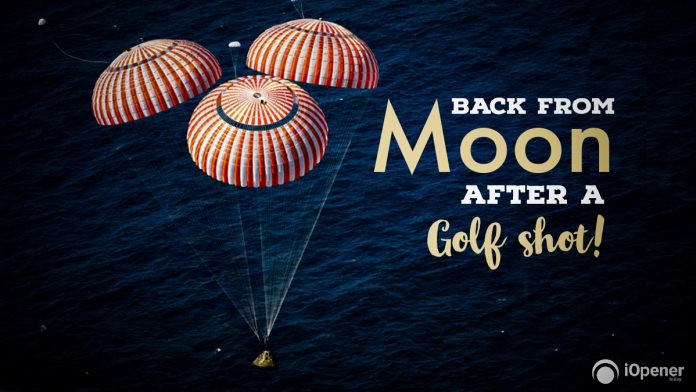 Back from the Moon after a Golf shot!

Have you ever, even for a joke, said that you’ll go all the way to the moon for a game and come back? In fact, this is something that actually happened back in 1970-1971 on the mission of Apollo 14. This was the third ever human landing on the moon, where humans spent thirty-three hours and thirty minutes on the moon with the objective of conducting a scientific lunar exploration. During this mission, Commander Alan B. Shepherd hit two golf balls on the lunar surface, thus becoming the first man to hit golf balls on the moon.

The Apollo 14 was a mission conducted by the National Aeronautics and Space Administration (NASA). The mission was actually supposed to take place in 1970 but had to be postponed due to the investigation related to the failure of the Apollo 13 spacecraft to reach the moon. The findings of the investigation prompted them to make some much-needed modifications to the Apollo 14 spacecraft.

The mission began when the spacecraft took off from NASA’s Kennedy Space Center (KSC) on January 31, carrying the crew – Alan B. Shepherd, the Commander, Stuart A. Roosa, the Command Module Pilot, and Edgar D. Mitchell, the Lunar Module Pilot. Hundreds of thousands of people gathered to watch the lift-off. The most notable persons among the spectators were Prince Juan Carlos and Princess Sofia of Spain, Astronaut Neil Armstrong and then US Vice-President Spiro T. Agnew.

Ultimately, the Apollo 14 spacecraft spent around 2.8 days in the lunar orbit, circled the moon 34 times and helped humans to conduct two moon walks. It landed safely back on earth, near Samoa in the Pacific Ocean, on this day in 1971. Today marks the 50th anniversary since the completion of this mission.

The first-ever on-site evidence of water on the moon's surface was discovered by China's Chang'e 5 lunar lander, adding...
Think Why

Have you ever thought of a day like that? What will be is your reaction if it really happens?