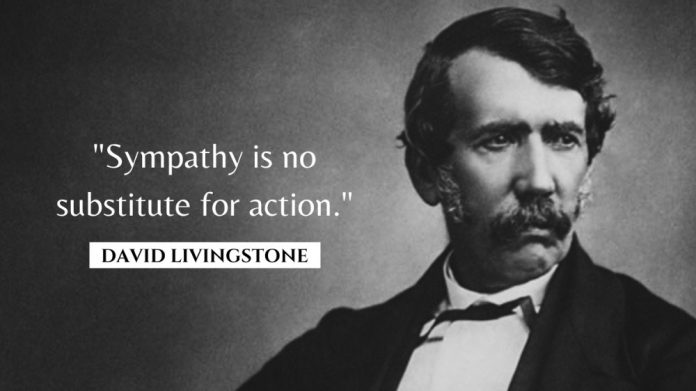 ‘Sympathy is no substitute for action’
-David Livingstone

We live in a world where, for those of us who are privileged, the line between greed and need is often blurred. At the same time, there are many people who struggle to meet their basic needs. Many of us probably feel deep sympathy for such people. But what the needy require is immediate action, as compared to mere sympathy.

In the annals of African history, we find the remarkable figure of David Livingstone who set the perfect example in this regard. A Scottish doctor, he made the radical decision to go to Africa when he felt God calling him to do so. Livingstone was a man of action. He kept a first-aid box with him wherever he went, so that he could treat the African natives who were ill whilst he shared the message of Jesus with them. Even though he faced many difficulties and challenges, he continued this adventurous journey as he explored and discovered large parts of the continent. He later went on to also become a prominent anti-slavery voice.

Preaching the message of Christ and the abolition of slavery became the most important goals in his life. Livingstone saw dire need around him, and he used his God-given skill to meet that need. The world we live in today also presents us with examples of desperate need all around us. Would we choose to move beyond sympathy, and act in whatever way we can, even if it is in small ways?

TORCHBEARERS “A teacher takes a hand, opens a mind, and touches a heart.” Let’s go down the memory lane of our...
Pearls

After the nuclear crisis in Fukushima, Japan, a group of 400 Japanese pensioners volunteered to face the dangers of...