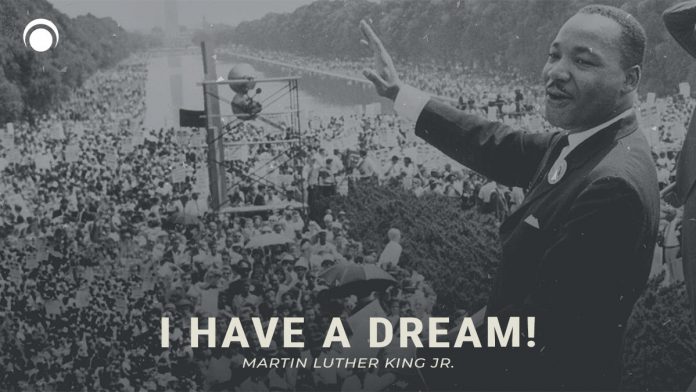 “I have a dream that my four little children will one day live in a nation where they will not be judged by the colour of their skin, but by the content of their character.” These are the famous words of Martin Luther King Jr. from his iconic ‘I Have a Dream’ speech, which is probably one of the most impactful speeches in history. Though delivered in Washington DC near the Lincoln Memorial in 1963, it resonates with us even today. The world still continues to dream of a day when people won’t be discriminated or judged based on their caste, creed, colour, gender or religion.

Every year, the 3rd Monday of January is observed as Martin Luther King Jr. Day. Born as Michael King Jr. on January 15, 1929, he was popularly known as “King”. King was a Baptist minister and one of the greatest figures who led the Civil Rights Movement in The United States of America.

King’s leadership was instrumental in the fight of African-Americans against legal segregation in Southern parts of the USA. He was a strong advocate for non-violence in these movements and was inspired by the teachings of Jesus and the principles espoused by Mahatma Gandhi.

As a child, King first encountered racial discrimination when he was separated from his white friend because of the policy of segregation. King’s father, a pastor, often used to advise him to love everyone alike by keeping in mind the teachings of Christ. These same teachings had a major impact in shaping King’s life, a fact that was often reflected in his speeches. The successful bus boycott movement in Montgomery in 1955 was just the beginning of the many movements led by King for the rights of the African-Americans. The Nobel Peace Prize that he received in 1964 was truly a fitting recognition of his defining contributions towards social justice.

Everyone has a dream, but King took his dream and converted it into a life-long conviction, spurring him to determined social action that inspired a nation towards a good cause. A man from a humble background, powered by his faith and convictions, rose to inspire the world through his dream. Just as King dared to stand up and fight against social injustice and discrimination, may this day inspire us to dream of a better world and stand up for a good cause. So, what is your dream?

"My home is in Heaven. I'm just traveling through this world." Four years back, on this day "America's Pastor," Reverend...
Red Letters

While the concept of Social Justice is preached everywhere and is a major point of discussion around the world,...