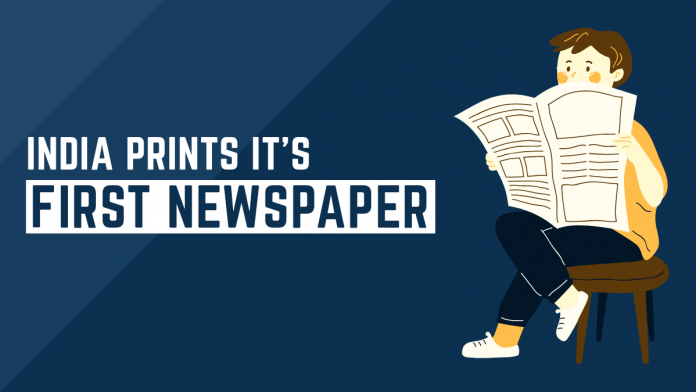 It was the late 1700’s, and the time when East India Company was expanding its administrative horizons across the Indian sub-continent. An Irishman who was born in 1740, James Augustus Hicky decided to come to India along with a surgeon. He fell into financial debt, and was imprisoned in the debtors’ prison for 2 years in Calcutta, until a lawyer helped him out.

It was during his time in jail that he acquired a printing machine and started a printing business there itself. It is here that the idea of publishing a weekly newsletter was born. The slogan “Open to all parties, influenced by none” was the initial motivating vision of this newsletter. Driven by this ideology, the first newspaper in India was printed and published on January 29th, 1780. It was named ‘Hicky’s Bengal Gazette’, and was sold at a retail price of Re 1 per copy. The circulation of this paper rapidly grew and peaked at 400 copies per week.

Though this was the first publication, the idea of printing a newspaper was first floated approximately 12 years before this by the Dutch explorer William Bolts. This English publication was the first of its kind in Asia, and was soon given competition by the East India Company with their newspaper, named the India Gazette.

With the India Gazette starting in November the same year holding views promoting the East Indian company’s agenda, Hicky’s editorial stance changed and took an a critical tone, accusing the then Governor General William Hastings of corruption & tyranny. This eventually made Hastings to restrict the sending of the newspaper by post, which Hicky called out as a violation of the ‘freedom of expression’.

The newspaper came to be known for its sarcastic and provocative style. Unlike many newspapers of its time, the newspaper wrote about the tyranny of taxation, rights of the poor & a proto-class consciousness. This eventually faced a backlash from the authorities, and Hicky was jailed and his newspaper banned. India’s first newspaper thus had to end its publication in 1782, 2 years after it was started; but it may be argued that this defining publication inspired a wave of press enterprise in India, which would eventually prove to become one of the pivotal factors in the national movement.