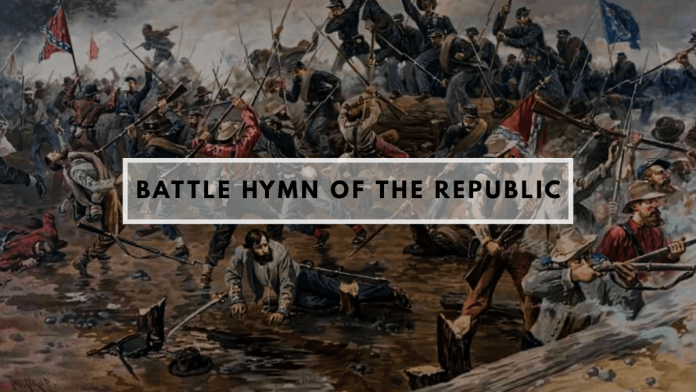 Battle Hymn of the Republic

It was the time of the Civil War in the United States of America. President Lincoln was elected by the American voters a year back, but most Southerners were fighting mad about Lincoln’s election. They were convinced that his true mission was to end slavery in the south, but President Lincoln made no such move initially. The United States was getting divided into two, where a new Confederate States of America was forming, and one by one these states began seceding. President Lincoln felt duty-bound to keep “the Union” together, while the South was fighting for its independence.

John Brown, a Baptist preacher, had given up his life for the cause of abolishing slavery. ‘John Brown’s Body’ was a well-known marching song that was sung amongst the northern soldiers. This song was heard by Julia Ward Howe in November 1861 during her visit to Washington D.C. to help the troops affected by the Civil War, and their families. Julia Ward Howe was a lyrical poet and prolific author who was active in prison reform, the fight to end slavery, and a fight for equal rights for women. A preacher who was with Julia encouraged her to write new lyrics to the tune.

It’s this inspiration, along with her Christian beliefs, that made her write the poem today known as “The Battle Hymn of the Republic” and sung with the same tune as the marching song. She writes about this experience 30 years later, “I… awoke the next morning in the gray of the early dawn, and to my astonishment found that the wished-for lines were arranging themselves in my brain. I lay quite still until the last verse had completed itself in my thoughts, then hastily arose, saying to myself, I shall lose this if I don’t write it down immediately. I… began to scrawl the lines almost without looking…. Having completed this, I lay down again and fell asleep, but not before feeling that something of importance had happened to me.”

That something of importance was published in the February edition of “Atlantic Monthly”, and sung couple of years later for President Lincoln, who broke down hearing the song. Martin Luther King Jr., the day before he was assassinated, in his last speech used the words of this song, “Mine eyes have seen the glory of the coming of the Lord.” Among the Christian community this song was popularised by the world-renowned evangelist Billy Graham.