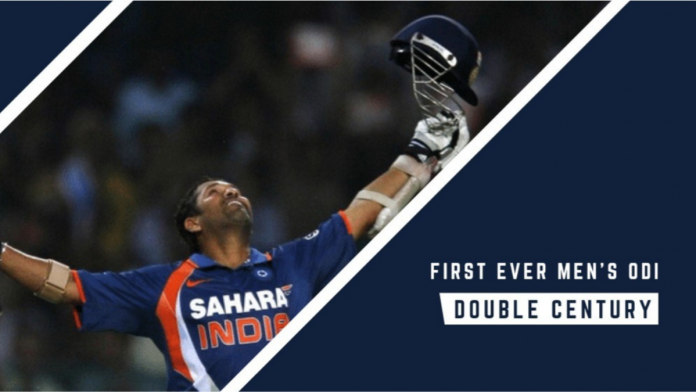 “The first man on the planet to reach 200 and it’s the cricket wonder from India!”

This was the present Indian coach Ravi Shastri on commentary calling the first ever double hundred in ODIs, and the superman he was talking about was none other than Sachin Tendulkar. On this very day in the year 2010, as India played South Africa at the Captain Roop Singh Stadium, Gwalior – the Indian master blaster achieved the pinnacle of an one-day international innings, and mind you this was well-before T20s had become as ubiquitous as they have one.

It was the second of the three One Day International (ODI) matches in the series. India went into the match with a 1 – 0 lead after victory in Jaipur in the first ODI. Indian captain MS Dhoni won the toss and decided to bat first. At this point no one even envisaged that Tendulkar would go on to achieve something that could not be achieved in 39 years and 2,961 ODI matches.

Tendulkar started his innings in style by driving Wayne Parnell’s ball to the cover boundary to get his first runs. By the time South Africa bought in spinner Roelof van der Merwe, Tendulkar was already on his A – game as he smashed the left – arm spinner’s ball to the fence to bring up his half century off just 37 balls.

He really asserted his dominance on the game and the South African ballers found it so hard to stop him. He bought up the 46th century of his career in style with a cut off Jean-Paul Duminy. At this point in the game the boundaries were flowing and India were looking to make a huge total. Tendulkar eventually crossed the previous record of the highest individual score in ODI of 194 in the 48th over.

The Master Blaster, facing a bowling lineup of Dale Steyn, Wayne Parnell and Jacques Kallis, smashed runs at brisk pace all around the park. Even at the age of 36, he showed no signs of ageing as he finally reached the magical 200 – run mark in the third ball of the last over.

It was an extraordinary innings by Tendulkar as he smashed 25 boundaries and three sixes, helping India reach a mammoth total of 401.

A heart Attack of Emotions!

It is a known fact that your mental health can affect your physical health. If you have issues and...
Read more
Pearls

In the absence of any other proof, the thumb alone would convince me of God’s existence.- Sir Isaac Newton
Read more
Think Why

What are your thoughts on this? It is high time we all talk about it.
Read more

iOpener Team - April 10, 2021 0
Faking is easier than being truthful, but don't we all already know what's better in the long run?

Thief Returns Man’s Phone He Snatched After Realizing It’s Not One...

Nothing to fear in here!

In a Fit of Rage!

Nothing to fear in here!