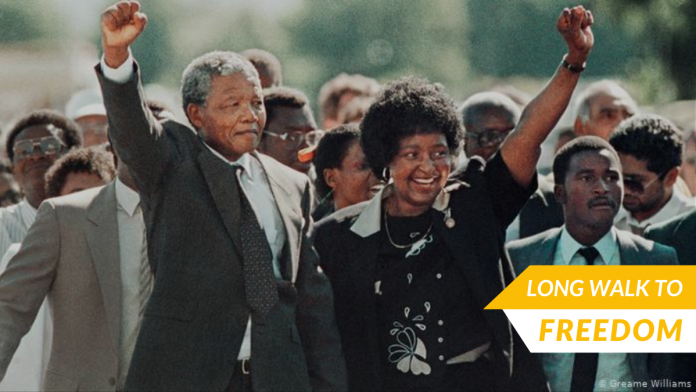 On this day February 11th, 1990, Nelson Mandela was released from prison after 27 long years of imprisonment.For those of you who don’t know, Nelson Mandela was the leader of the movement to end apartheid in South Africa. Apartheid was a system of legislation that upheld racist policies against non-white citizens of South Africa, and maintained a strict segregation between white and non-white people.

Like Gandhi in India, Nelson Mandela too started out as a lawyer. As a lawyer, Mandela joined the African National Congress in 1944. The National party gained some traction in 1948. A lawyer would not be a very likely person to get arrested, so why was Mandela arrested and imprisoned for 27 years?

The massacre of peaceful black demonstrators at Sharpeville in 1960 acted as the stimulus which made Mandela to help organise a paramilitary branch of the African National Congress, to engage in guerrilla warfare. Consequently, in 1961 he was arrested for treason , but he was acquitted. He was arrested again in 1962 and tried in 1964 for leading the liberation movement against apartheid, was convicted along with other members of the African National Congress and was sentenced to life in prison. Behind the walls of prison he continued to spearhead the movement against apartheid.

In 1989, F.W. de Klerk became the South African President. He brought in policies to dismantle apartheid. He also ordered the release of Nelson Mandela in 1990. Mandela soon led the reformation of the government to establish a multiracial government, and he also strove to bring about racial harmony between the whites and non-whites. Nelson’s efforts against the apartheid and to bring peace to a country torn apart by racial animosity didn’t go unnoticed; he received the Nobel Peace Prize. Later, he also went on to become the President of South Africa.

“Leave me alone, I need my freedom,” is one of the persistent cries of teenage and young adulthood. The...
Red Letters

The end of a military occupancy or a king’s tyrannical reign, overthrowing of a colonial regime, or escaping annexation...
On This Day

Apartheid in Afrikaans means ‘apartness’. It was a government legislation that strictly regulated relations between South Africa’s white and...