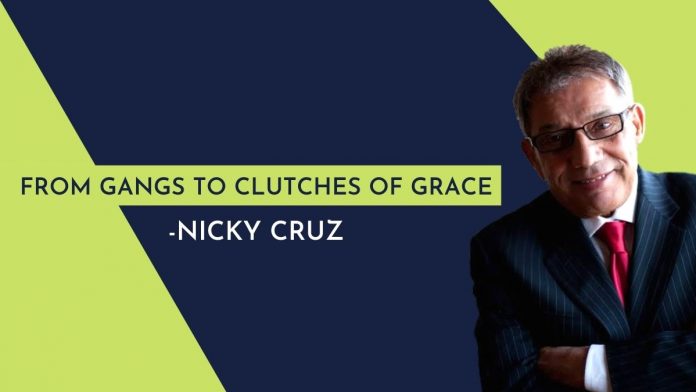 Born in Peurto Rico to parents who were followers of spiritism, Nicky Cruz experienced intense physical and mental trauma as a child, making him numb and hard-hearted towards violence and loss. At the age of 15, he ran away to the streets of New York City, and soon became part of the infamous street gang, the Mau Maus. He quickly rose up the ranks to become president of the Mau Maus.

Once, as a famous preacher called David Wilkerson was preaching in the neighbourhood, Cruz encountered him. Wilkerson said to him, “Jesus loves you and will never stop loving you.” This infuriated Cruz, and he slapped Wilkerson and threatened to kill him. But later, when Wilkerson organised an evangelistic meeting for the Mau Maus, Cruz ended up attending it. As he sat there with a deep sense of guilt about his violent life, he experienced the love and forgiveness of God washing over him. This experience made him a transformed man.

Cruz went on to study the Bible and become a preacher. His own history gave him a deep passion to work for children who grow up in poverty and around crime, in order to give them opportunities of healthy development. This is why he is a pivotal part of an organization called Global Teen Challenge, which works towards this objective. He is also the founder of Nicky Cruz Outreach, a Christian evangelistic ministry, and a bestselling author, with two autobiographies Run baby Run and Soul Obsession.

“God has given us power over darkness, power to overcome our sinful nature, power to move mountains, in the name of Jesus.”

Thousands of farmers drove their tractors into the nation's capital, New Delhi, on Tuesday, as part of the ongoing...
On This Day

December 29, 1975, will always be remembered as one of the gravest days for the city of New York....