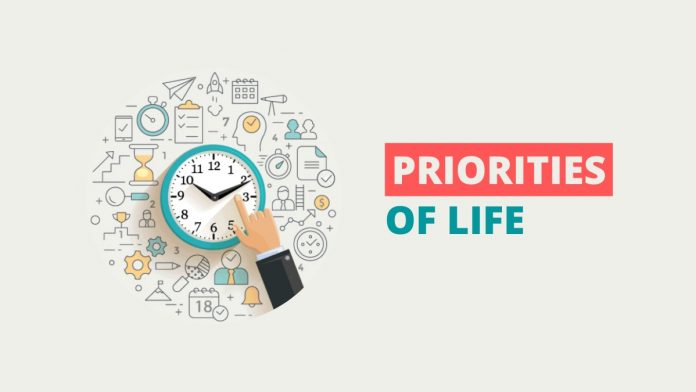 Some of us have probably heard the story of a teacher who pulled out a huge jar before her students, and put huge rocks into it until they reached the brim. Then she asked the students, “Is this jar full?” The class unanimously replied, “Yes.” She proved them wrong by putting some gravel into the jar, and asked them again “Is the jar full now?” They replied, “Maybe not.” She filled it again with some sand, and asked them again “Is the jar full?”, and they replied “No.” She filled it again with water until it was finally full. Then the teacher asked the students “What is the point of this illustration?” Someone replied, “No matter what you put, there’s always space for something more.” But the teacher responded, “No. The point is that if you don’t put in the big stones first, you can’t fit in the others.”

What are the big stones in your life – the things you give prime importance to or the things that you desire above all others? Often we end up mistakenly prioritizing things which are really not the most significant in life, much like putting small stones or sand first into the jar, and end up having no emotional space when the really important things come along. This leaves us exhausted and frustrated, feeling like things simply didn’t work out the way they should have. Much of the equilibrium in our life is lost and chaos is created simply because we don’t get our priorities right.

True to its basic message that God, and a relationship with Him, is meant to be at the centre of our lives, the Bible says, “But seek first the kingdom of God and His righteousness, and all these things will be added unto you.” Putting anything else in the place of God will cause disorientation at some point, because we are designed to keep Him first. Prioritizing God is putting the Biggest Rock first.