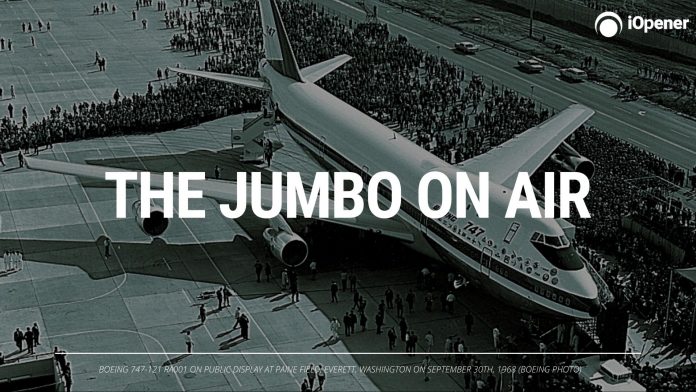 The Jumbo on Air

January 22nd, 1970 is an important milestone in the history of commercial air travel. It was on this day that the commercial flight operations of Boeing 747, the world’s first “jumbo jet” was launched.

The Boeing 747 was designed and built in the late 60’s, a dream project which was undertaken on the airliners request to reduce the jet fuel cost by 2.5 times with higher number capacity. It became the first aircraft with twin aisle in its time. The concept emerged post the introduction of Boeing 707 in October 1958. The initial planes were powered with by JT9D engines from GE & Rolls Royce, accommodating up to 366 passengers in 3 classes. This was 35% more passengers that was ferried on a travel, than its closest rival.

The first passenger jumbo jet was acquired by Pan American Airways and had its maiden commercial flight on the 747 jet named ‘ Clipper Young America’ from JF Kennedy International Airport in the USA to Heathrow airport in London carrying 335 passengers and 20 crew members. This was a defining moment for the aviation industry wherein increased capacity, luxurious space and lowered costs helped in taking the popularity of commercial aircraft to a middle-class customer base. Often referred to as the ‘Wide bodied wonder,’ the aircraft completed its 50 years of service on 22nd January 2020.

What are your fond memories of the Jumbo on air? Feel free to let us know.