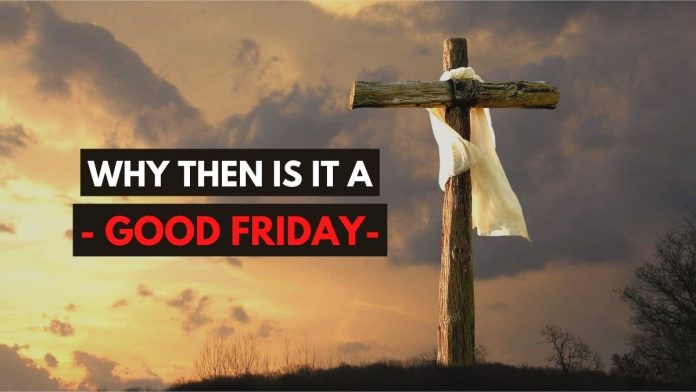 Why then is it a ‘Good’ Friday?

The guilty ought to be punished. And that is a fair statement. However, having said that, suppose there is a good person who feeds the hungry, helps the poor, has compassion towards the sick, and loves everyone, but to our horror, one fine day he is sentenced to death and consequently executed! He doesn’t even get a fair trial. The judge says he can’t find evidence of any of the so-called charges against him, yet he gives in to the pressure of some religious leaders and a mob led by them, and hands the innocent man over to them! Will you call such an event a “good” thing?

Well, that’s exactly what is celebrated as “Good Friday” by Christians today – a day to commemorate the crucifixion of Jesus Christ, a person who fed the hungry, helped the poor, healed the sick, and loved everyone, yet was crucified for no fault of his own. So why is such an injustice that happened 2000 years ago remembered as a good thing?

1. A Good Redemption for a Not-so-Good Humanity:

A not so good thing about human beings is that, we are inherently not good. This is why it doesn’t take much time for a three-year-old child to start lying. In each of our lives, if we undertake an honest introspection, we would have to accept that we usually end up doing more bad than good, be it with our actions or our thoughts. Don’t we all usually have more of an inclination towards doing the wrong thing in order to benefit ourselves at the cost of others? That’s our basic instinct, though we may sometimes suppress it and put on a good persona when we consider what others might think or say -much like wearing a good-looking mask. But this just validates the underlying fact that there is evil that lurks at the core of each of our beings, though this may look different for different people. What then is due for us and for the whole of mankind if we have to reap justly what we have been sowing?

However, on the first Good Friday ever, God, in his love, put into action his plan to save all mankind from their sins and their guilt. We are all okay when a person found to be guilty is punished, but when that person is someone we love, we would try to find a way to save them from that punishment. This is precisely what God did – he loved us so much that he wanted to save us all from the punishment that we deserved. The extent of his love was so great that he took our punishments upon himself and paid it through his death. The cross is the symbol of supreme love, justice, and forgiveness.

2. A Priceless Relationship Restored at a Heavy Price:

3. The Friday is Good because the Sunday Comes After:

Most of us feel a sense of deep relief on our Fridays, even when the day may have been a very difficult one, in anticipation of a much-needed weekend rest. The weekend that followed the first Good Friday was arguably the most amazing and game-changing weekend in the history of humanity. This is because death could not stop Jesus and He arose from the tomb. He is alive today and continues to give the hope of the same eternal life of rest to those who choose to walk with him in the intimate relationship which he offers. Good Friday is good because it is followed by an Easter Sunday.

Yes, dear readers! The Creator of the universe, the great God, came down in the form of a man and died on the cross, in our place, to save us from our sins. You simply have to believe, invite him into your life, and receive the restoration that he offers freely. Then, his death will become a reason for you to celebrate. Hope today turns out to be a ‘good’ Friday in your life too.