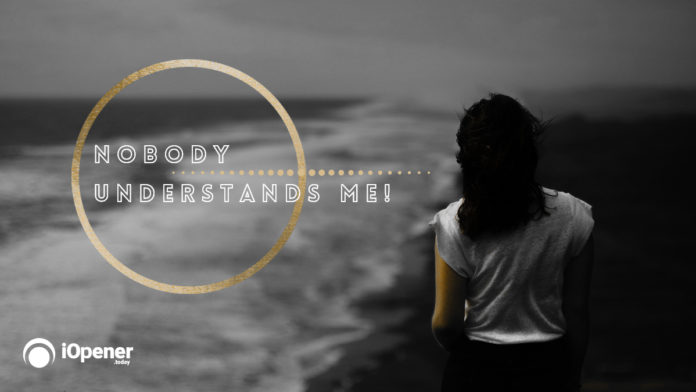 At last, the bell had gone off! Unlike other days, from the heavy steps of the students, one could easily guess that it was a tiring day at school. What nobody could quite guess was the heavy heart Suma was hiding behind her smiles. She was desperate to get home. Not because it was any better than school, but just so she could tuck herself away in her room and let her tears flow. You see, Suma had tried her best in everything in life, but it seemed to lead nowhere. Her pain, sorrows, temptations, the path she walked- no one seemed to know. No one seemed to understand even her best intentions to overcome her struggles. Every expectation returned empty, till she had lost all hope in people. As hard as she tried to ignore it, Suma found herself drowning in self-pity, lies and despair. She concluded: “Nobody understands me”.
Just then, something caught her eyes! Curious, she reached out to find an old card from her friend. It read, “Jesus understands”. She laughed mockingly, “Really? Someone up there, far above- how could he understand what I am going through?” Besides, she only knew Jesus as a Christian God. But as she began to flip the pages, she was surprised. This Jesus had had an earthly life, faced struggles, pain, rejection, anger, hunger, and thirst. He was tempted, hated, insulted, trampled, spat upon, and finally killed by his own! The more Suma opened her heart to know Jesus, her burdens began to seem insignificantly small in front of what Jesus had gone through. And then it struck her: Jesus was misunderstood so that she would be understood; he was despised so that she would be loved; he was forsaken so that she would never have to be alone; he bore her sins so that she would live. For the first time, Suma saw a glimmer of hope. Closing the card, she fell to her knees and prayed. Peace flooded in where there was emptiness before. Smiling, she whispered, “Jesus understands me”.
Dear friend, do you feel that your life is beyond anyone’s understanding? Look to Jesus today. No matter what you are going through, Jesus understands. You’re not beyond His reach for he is mighty to save. Try Jesus!

Studies show that if a person has faced rejection or disparaging situations in childhood or adolescence, they are likely...
Power-up

Communication is the act of giving, receiving, and sharing information. It is fundamental to the existence of humans. Communication...

Don’t miss the stitch in Time!