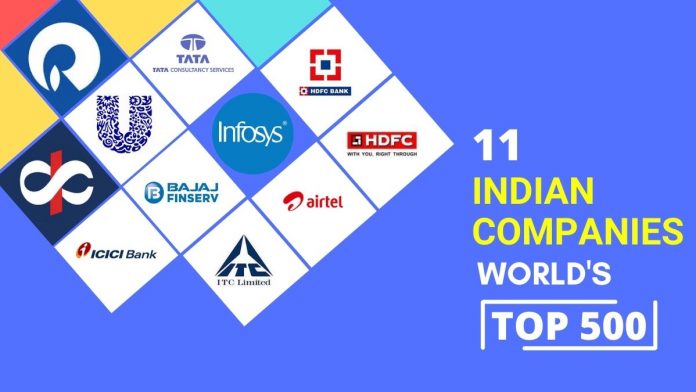 The Coronavirus has brought a tough time upon everyone, except for some of the biggest corporations of the world. It appears that none of the top Indian companies seem to have done too badly for themselves in the year 2020. According to the Hurun Global 500 list, a total of 11 Indian companies feature in the top 500, and all but ITC and ICICI Bank increased their valuations despite the global pandemic and the resulting economic slowdown.

Apple continues to be the world’s most valuable company at an estimated worth of $2.1 trillion, followed by software major Microsoft & e-retailer Amazon – both valued at $1.6 trillion. Google’s parent company Alphabet stands third in the list at $1.2 trillion. Facebook came in fifth with a total net worth of $816 billion, as internet, software, and social media giants occupy all of the top slots.

Reliance Industries, with a total net worth of $169 billion is the top-ranked Indian corporation, followed by Tata Consultancy Services at $139 billion and HDFC Bank at $108 billion. The total valuation of the Indian companies grew a remarkable 14% year-on-year, which is impressive for a pandemic-plagued year.

However, the entire valuation of the 11 companies put together at $805 billion was still less than fifth placed Facebook – accentuating the vast difference in valuations of software & internet giants in today’s economy.

Hindustan Lever, Infosys, HDFC Limited, and Kotak Mahindra Bank also featured in the list, with each estimated to be valued between $50 billion and $100 billion each. ICICI bank lost 0.5% of its valuation while ITC nosedived 22%, but they still managed to stay in the top of the Indian companies’ rankings.

Even though there are just 11 Indian companies in the top 500, almost half of the 500 companies have a presence in the Indian market. Mumbai has the highest concentration of these companies with 64, followed by Bangalore and Gurugram.

Hurun India MD and Chief Researcher Anas Rahman Junaid said, “Although only 11 companies from India made it to the Hurun Global 500, it is interesting to note that more than half of the non-Indian companies in Hurun Global 500 have their regional presence in India, demonstrating the importance of India in the global supply chain and the country’s demographic dividend.”

Apple is clearly setting some high standards with data privacy, and any amount of work arounds by apps are...
General News

Apple surpassed its own expectations and posted $111.4 billion in revenues for the previous quarter even as profits rose...