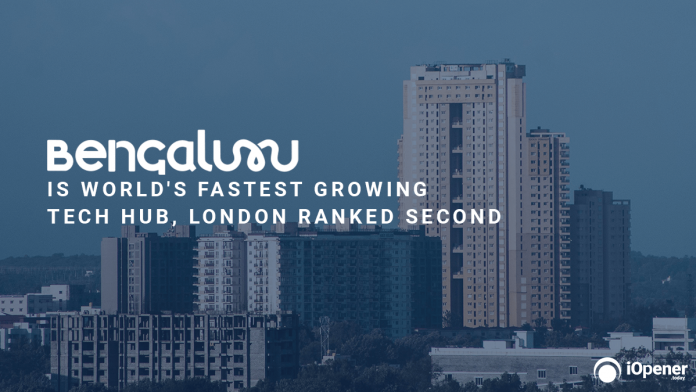 Bengaluru, the IT hub of India, has emerged as the world’s fastest-growing mature tech ecosystem in the world since 2016, followed by the European cities London, Munich, Berlin and Paris. India’s financial capital Mumbai came in at sixth place, according to a new research released on the 14th of January in London.

The data from Amsterdam based Dealroom.co analyzed by London and Partners, the international trade and investment agency for the Mayor of London, revealed that investment in Karnataka’s capital of Bengaluru grew an impressive 5.4 times from $1.3 billion in 2016 to $7.2 billion in 2020, while Maharashtra’s capital Mumbai grew 1.7 times from $0.7 billion to $1.2 billion in the same period. London recorded an impressive three times growth between 2016 and 2020, rising from $3.5 billion to $10.5 billion.

“It’s fantastic to see that Bengaluru and London ranked as the top two fastest growing global tech hubs for VC investment. Our two great cities share mutual strengths in entrepreneurship and innovation – creating lots of opportunities for tech investors and companies to do business across both regions,” said Hemin Bharucha, Chief Representative of India at London & Partners.

“London has a strong trade and investment relationship with cities across India and today’s figures show the opportunities for future partnerships between the UK and India on technology. Despite the pandemic, tech companies in London and India are continuing to lead the way in creating game-changing technologies – especially in high growth sectors such as EdTech and Fintech,” he added.

He also stated, “The UK government’s recent Brexit deal with the European Union brings certainty for Indian companies and investors looking to London and we look forward to welcoming more Indian businesses to the UK capital in the years ahead.”

The two German cities of Munich and Berlin and the French capital Paris, were the other fast-growing tech hubs close behind Bengaluru and London, all three more than doubling their amount of investments received in the 2016-2020 period. The UK capital, however, secured its status as Europe’s leading tech hub – with London companies receiving over three times the amount of investment than any other European tech city.

“It’s brilliant to see how resilient London’s tech sector has been, despite all the challenges of 2020. International investors have shown real confidence in London, with new venture capital funds setting up here to invest in high-growth companies in sectors like fintech, cybersecurity and health tech. This is because London continues to be the gateway to the European market and a fantastic place to set up and scale a tech company,” said Laura Citron, CEO of London & Partners.

Even though the outbreak of the global pandemic drastically affected many sectors, the software technologies continued to be a booming sector for investors, with remote working seeing a substantial increase in the year 2020.

Kerala And Rajasthan To impose Lockdown Due To Rise In Covid-19...