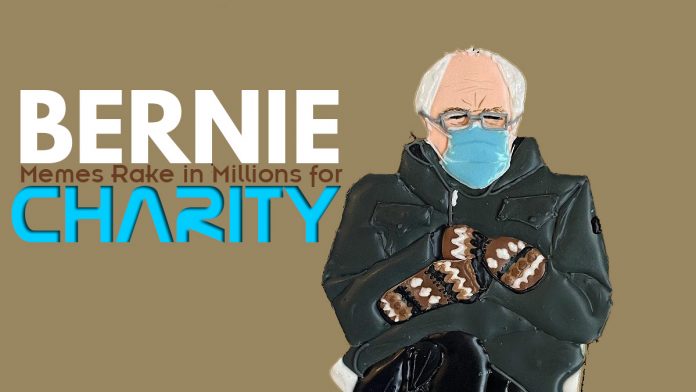 That Bernie Sanders memes from the US Presidential Inauguration have taken the internet by storm would be stating the obvious but what is little less known is how much the now-famous Bernie Sanders grumpy winter look has raised for charity. Yes, Bernie Sanders never loses an opportunity to fight for the common man, and sure enough, his memes are also raising quite some money for some good & charitable causes.

Head to berniesanders.com and in the merchandise section you have a complete list of Chairman t-shirts, sweatshirts, and hoodies with the now-iconic image. All of the proceeds from the sale of these merchandise go to some Vermont-based charities.

“100% of proceeds will go to charities in Vermont, including Feeding Chittenden, Chill Foundation, and Vermont community action centres,” the website says emphatically.

According to some reports the merchandise has raised over $1.8 million to these causes and looking at the popularity of the memes, the merchandise, and of course Bernie himself it would be a while before the cash registers start ringing for these charities from the home-state of the Senator himself.

In a statement released by the Senator himself, while thanking his supporters for raising the money, he reminded Congress of its inaction and immediate need to put more money into the hands of working-class Americans reeling under the Corona Virus pandemic.

Currently, most of the merchandise has been snapped up, and Bernie’s fans will need to have patience should they now want to get their hands on the products. All of the stock disappeared off the virtual shelves as soon as it debuted and currently, there’s a bit of waiting time before you get have these merchandise delivered to your homes.

The image shows Bernie Sanders hunkered down on a cold, blustery, snow-filled inauguration day, with the Senator sitting in a socially distant, somewhat grumpy manner. The look, complete with mittens and a winter coat, unleashed a gazillion memes on the internet, and Bernie was everywhere. As one media outlet put it – like the elf on the shelf!

Maharashtra CM Uddhav Thackeray said that the state could soon go under a complete lockdown once again, as the...