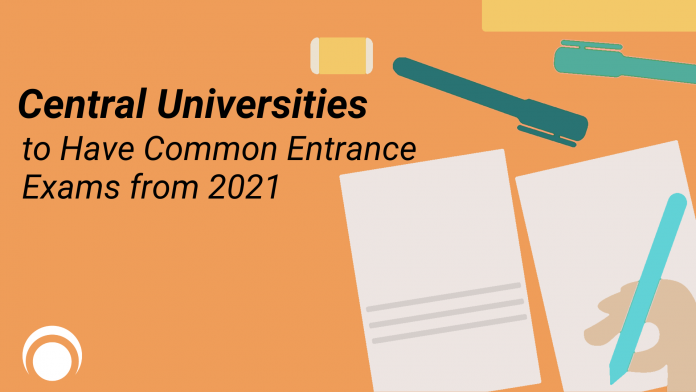 Central Universities to Have Common Entrance Exams from 2021

The National Testing Agency will conduct a high-aptitude test for admission into the undergraduate programs of the Central Universities across the country. Making the announcement, Higher Education Secretary Amit Khare said that this will be implemented from the 2021-22 academic year and will include both a subject-specific and a general test.

This will be a common, computer-based test and will end the immense pressure students face due to the high cut-off percentages required under the current regime. The government has also set-up a seven-member committee to recommend the modalities for the implementation of the examination. The test will be mandatory for all admissions and will replace the existing decentralized admissions mechanism.

UGC Chairperson professor DP Singh added that the committee will submit its report within a month and is expected to help universities take in students with overall aptitude rather than just high academic scores. There will be a minimum criterion set for those desiring to appear in the exam, said a report published by the Times of India.

As per the earlier unveiled National Education Policy of 2020, the implementation of the national aptitude test was a key educational reform to ensure greater parity in admissions at the undergraduate levels. The committee to implement it will include Professor RP Tiwari, VC of the Central University of Punjab as the chair, and include VCs of the Central Universities of DU, South Bihar, Mizoram, Banaras Hindu University and the DG of NTA, Joint Secretary from the Ministry of Education.

What is Environmental Science? The study of the environment is not a new thing. From the beginning of time, mankind...
General News

Serving incarceration for a wide range of crimes, and often discarded as the worst in the society, the inmates...