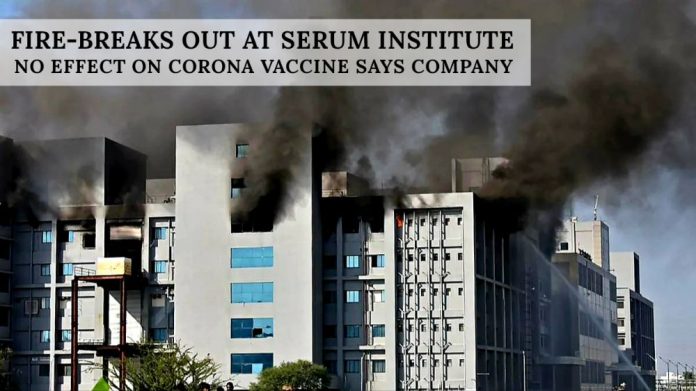 Fire Breaks Out at Serum Institute, No Effect on Corona Vaccine Says Company

A massive fire broke out at Serum Institute, Pune, at around 2:45 in the afternoon on Thursday. It took three hours for firemen to control the fire due to the thick smoke rising from the building. Four people have been evacuated. Pune’s Mayor Murlidhar Mohol said five people were found dead after the blaze was brought under control . The cause is still unknown; however, it is believed that the fire broke out because of an electrical fault. A total of 15 fire engines and ambulances were rushed to the spot. The five people who died were contractual labourers and Serum Institute has announced a compensation of Rs 25 lakh each for their families.

“We have just received some distressing updates; upon further investigation we have learnt that there has unfortunately been some loss of life at the incident. We are deeply saddened and offer our deepest condolences to the family members of the departed.” Serum CEO Adar Poonawalla tweeted.

PM Narendra Modi tweeted, “Anguished by the loss of lives due to an unfortunate fire at the @SerumInstIndia. In this sad hour, my thoughts are with the families of those who lost their lives. I pray that those injured recover at the earliest.”

The Manjari facility is where the Covishield vaccine used in the nationwide inoculation drive against the Coronavirus pandemic is made. The building where the fire broke out is part of the under-construction site of the Serum facility and is one km from the Covishield manufacturing unit, sources said.

“Manjari facility is being built for any pandemic in future so vaccines can be developed in a short span of time. Packaging will also happen at the facility,” Umesh Shirsavkar, Deputy Director, SII, told NDTV earlier this month.

This incident is unlikely to hit the production of Covishield, the Coronavirus vaccine manufactured in India by the SII, in partnership with the Oxford University and British-Swedish pharma firm AstraZeneca, the entities which originally produced the vaccine in the UK.

The fire again broke out in the evening. After the preliminary investigation, it was ascertained that the first fire began on the 2nd floor, inside one of the buildings where preparation for the production of the BCG and Rotavirus vaccines was going on, along with the construction work that was in progress.

Poonawalla told CNBC-TV18 that the fire would mean delays in launching new products and revenue losses of more than Rs 1,000 crore. Equipment worth millions of dollars has been damaged, he said.

Maharashtra Chief Minister Uddhav Thackeray’s office tweeted that he was in touch with the Pune Municipal Commissioner for “complete on-ground updates”. Mr. Thackeray had directed the state machinery to coordinate and ensure that the situation was under control. He will visit the site to inspect & take stock of the situation tomorrow at 2 pm.

Moreover, the fire audit will take place on Friday. “Energy Audit teams have been instructed to conduct fire audit, they will do it tomorrow.” Maharashtra Deputy CM Ajit Pawar said on Thursday.

Free Covid Vaccine for All in India, Centre Announces Change in Policy from June 21

Prime Minister Narendra Modi made a major policy-shift in the covid vaccination program in India as he announced that...
General News

Maharashtra CM Uddhav Thackeray said that the state could soon go under a complete lockdown once again, as the...

Free Covid Vaccine for All in India, Centre Announces Change in...