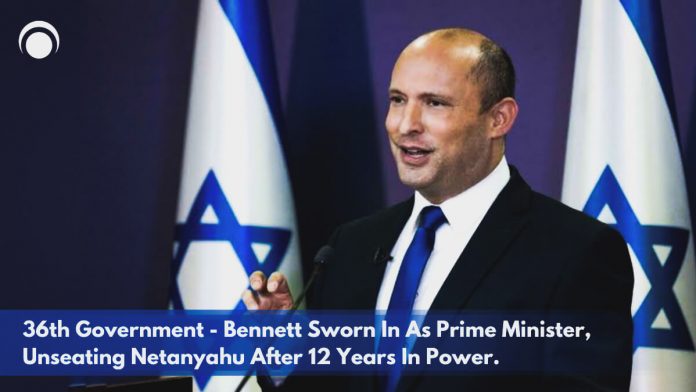 Naftali Bennett has been sworn in as the new Prime Minister of Israel, following a a historic vote that led to the removal of Benjamin Netanyahu after 12 years at the helm, and made the Yamina leader the new head of the government in the country.

Thousands of people gathered in Tel Aviv to celebrate the outcome, as the 36th government of the middle-eastern nation took charge. And the now-former prime minister Netanyahu came out to shake his successor’s hand in a symbol of the peaceful transition of power.

Yesh Atid chairman Yair Lapid, who put together the coalition after being tasked by outgoing President Reuven Rivlin with the job, was sworn in as “alternate prime minister and future prime minister,” as well as foreign minister. In all, 28 ministers were sworn in, including a record nine women ministers.

Following the swearing-in ceremony, members of the new government went to the President’s Residence for the traditional commemorative photograph President Reuven Rivlin, who incidently will end his seven-year term on July 9th.

Naftali Bennett, 49, is now Israel’s second-youngest prime minister — even tough the record for youngest stays with Netanyahu, who was just 46 the first time he assumed the role in 1996. Bennett is also the leader of the smallest faction ever to appoint a prime minister.

The new government’s inevitable weakness was highlighted by the razor-thin 60-59 vote of confidence. Members of Netanyahu’s government vacated their seats at the government table in the Knesset Plenum immediately after the confidence vote, with Netanyahu departing the prime minister’s chair.

Speaking shortly prior to his defeat in the vote, Netanyahu said, “if it’s our destiny to be in the opposition, we’ll do so with our heads high until we take down this bad government and return to lead the country our way.”

The new government plans largely to avoid sweeping moves on hot-button international issues such as policy toward the Palestinians and to focus on domestic reforms.

Netanyahu unleashed his fury on Bennett in his final speech as prime minister of Israel and vowed to work tirelessly to topple the new coalition. “I will fight daily against this terrible, dangerous left-wing government in order to topple it,” Netanyahu said at the conclusion speech in the Knesset plenum_. “With God’s help, it will happen a lot earlier than you think it will,”_ he mentioned_._

The government is backed by eight of the 13 parties that won seats in the March 23 election, for a total of 60 votes in the 120-member Knesset.

Bennett presented his new ‘reasonable and responsible’ government, pledging that it would ‘end a terrible period of hatred among the people of Israel.’ He said that the new government would work for all the citizens of Israel and bring an end to a cycle of elections and divisiveness.