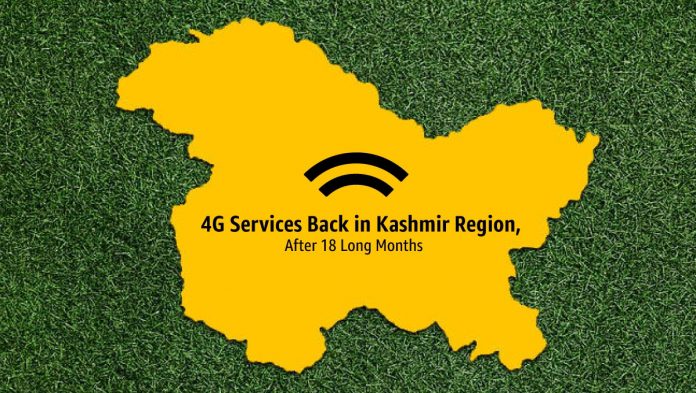 4G Services Back in Kashmir Region, After 18 Long Months

High Speed 4G internet services are being restored across Jammu and Kashmir from 5th February 2021, onwards. This news was confirmed by Rohit Kansal, Jammu and Kashmir Principal Secretary (Power & Information). This will mean that the whole of Jammu and Kashmir will have high-speed internet first the first time in 18 months. The services had been on hold since August 5, 2019 to prevent a backlash against the center’s move to revoke Article 370.

According to PTI, the services are likely to resume from Friday midnight.

Over the last year, broadband internet and 2G mobile data were restored in phases as it was observed by the Supreme Court that the restrictions on internet services were a blow to the democratic rights of the citizens in the region.

Low-speed 2G internet was restored in the Valley in January 2020, while the Central Government told the Supreme Court in August 2020 that 4G internet services will be allowed on a trial basis in one district of Jammu – Udhampur and one of the Kashmir valley – Ganderbal after Independence Day. The curbs continued on the rest of the regions in Jammu and Kashmir with restrictions extended several times in the past.

According to the administration, the mobile internet services were suppressed to stop the spread of misinformation and terrorists from abusing the networks.

During the period of this ban, there has been growing demand from students and professionals for the restoration of 4G mobile internet services. Businesses, health care professionals and people from almost every field were demanding the restoration of the high speed internet services citing losses suffered during covid-19 and the subsequent lockdown.

Former Chief Minister Omar Abdullah welcomed the move to restore 4G internet services. “4G Mubarak! For the first time since Aug 2019 all of J&K will have 4G mobile data. Better late than never.” he tweeted.

Meanwhile, Lt Governor Manoj Sinha who has been constantly ensuring the review of the ban by the special committee, since the time he took over in the UT last year, approved the restoration of 4G services. He also thanked Prime Minister Narendra Modi and Home Minister Amit Shah in his tweet.

“I thank the Hon’ble PM @narendramodi Ji and HM @AmitShah Ji for acceding to our request and restoring 4G services in the entire J&K UT. The move will fulfil the aspirations of the people, particularly the youth,” the Governor said in a tweet.