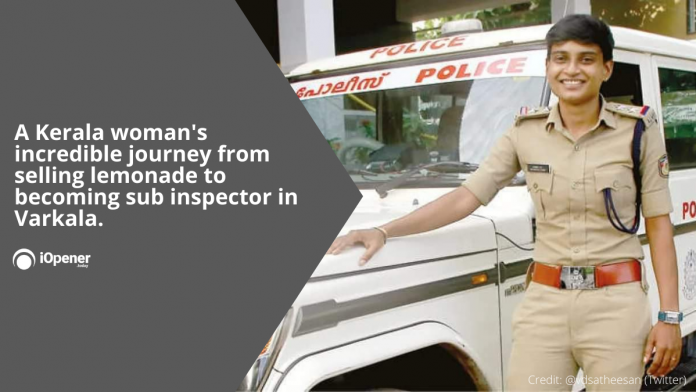 A Kerala woman’s incredible journey from selling lemonade to becoming SI in Varkala.

From the days when life forced her to sell lemonade and ice cream to tourists in Varkala, to now when she has joined as a probationary sub-inspector at Varkala police station, the incredible story of Anie Siva is inspiring everyone around. At a time when multiple cases of women ending their lives because of issues in their lives is doing the rounds, Anie’s life story has set a great example of resilience and will power.

When Anie Siva was a first-year student at KNM Government College in Kanjiramkulam, she married against her family’s will. Her husband left her 2 years after marriage and she was left alone with her six-month old baby. She tried to return home, but her family didn’t accept her back. She started living in a shed at her grandmother’s house with her son Shivasurya.

To make ends meet and also to complete her degree, she did different jobs.”I started selling curry powder and soap first. Later, I became an insurance agent. Then I used to deliver essential items to people at their homes by travelling on a motorcycle and I got the money to complete my degree in Sociology”, Anie said.

“In stalls at Varkala Sivagiri ashram, I tried many small businesses like selling lemonade, ice-cream to handmade crafts. Everything flopped. In 2014, Shaji chetan, (who is a KSRTC driver) suggested and helped me with money to study and write the sub-inspector test. He is like a father-figure, elder brother and my guardian. I attended a crash course and used to prepare for the SI test for at least 20 hours a day.”

Her determination and hard work reaped results. In 2016, she joined the service as a civil officer and later in 2019, she cracked the SI test. On Saturday, after completing the probationary period, she took charge as the Sub Inspector at the Varkala Rural Police sub-division headquarters.

“I always wanted to be an IPS officer. But fate had other things in store. Now, I feel proud and also emotional with the kind of support I am getting after many shared my Facebook post in which I shared my joy in a brief note,” she said.

Congratulating Anie for her success, Kerala Police tweeted, “A true model of willpower and confidence. An 18-year-old girl who was left on the streets with her 6-month-old baby after being abandoned by her husband and family has become Sub Inspector at Varkala police station.”

“I got to know that my posting is at Varkala police station only a few days back. This is a place where I have shed many tears with my small child, with no one to support me,” Anie told ANI.

Responding to the recent incidents of girls’ suicides following domestic violence and dowry harassment in Kerala, Anie says, “We need to edify not the girls, but the general public.”

“The girls’ parents are ready to accept their daughter if she returns (leaving her husband’s home), but they are also scared of the public’s comments. This should change,” Anie told Manorama News.

The hard work, determination and strong will power of Anie Siva which helped her to fight against all odds are something which every young girl can look up to. She is truly an inspiration and a proof that nothing can stop a fighting spirit. May her story motivate many young souls to not lose hope and keep fighting towards their goals.

In the coming week, the world celebrates women and womanhood. Women are not only mothers, wives, sisters and daughters...
Think Why

There are moments in life when we charge ourselves, buckle up and get serious! Share with us, one of...