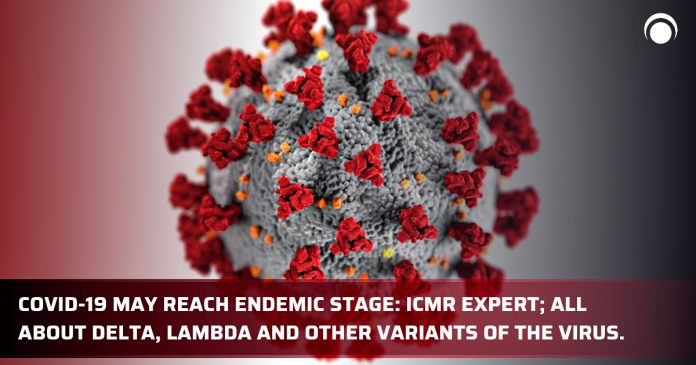 Covid-19 May Reach Endemic Stage: ICMR Expert; All about Delta, Lambda and Other Variants of the Virus.

According to experts, the Covid-19 virus may reach its endemic stage just like influenza, in due course, and only the vulnerable population may have to take the vaccine shot annually. This was articulated by Samiran Panda, Head of the Division of Epidemiology and Communicable Diseases, at the Indian Council for Medical Research (ICMR).

He also added that influenza, commonly known as flu, was a pandemic 100 years ago but today it is endemic.

“Similarly, in the case of Covid-19, we expect that it will gradually become endemic from its current state of being a pandemic. Currently, we recommend the elderly to take annual flu shots. As the influenza virus keeps on mutating, we simultaneously make minor changes in the vaccine. So, there is no need to panic. The vaccines available now are largely effective against the new variants of Covid-19,” he added.

Panda also said that the vaccines are not infection preventing, but disease-modifying. Experiments at the ICMR have proved that the vaccines presently available in India are effective against the new variants as well. However, the efficacy may differ for different strains, he said.

Breastfeeding mothers should get themselves vaccinated against Covid-19 without any hesitation, Panda added. The antibodies that are developed in the mother as a result of the vaccination get passively transferred to the baby while breastfeeding and could be helpful to the child, he said.

Meanwhile, two cases of the Kappa strain of Covid-19 have now been discovered in Uttar Pradesh, after two patients were reported of having the Delta plus strain in Deoria and Gorakhpur.

As the cases of Delta plus variant in India are increasing, other variants have become a topic of concern after India’s recent encounter with the deadly second wave. As per a report in News18, apart from the Delta Plus variation, four new varieties have gained the attention of health experts. B.1.617.3, a relative of the Delta variant; B.11.318, which contains 14 mutations; Lambda, a variant discovered by Public Health England and classed as a variant of interest (VOI) by the World Health Organization; and Kappa or B.1.617.1 are among the variants.

The Delta variant which was first discovered in India, has been attributed as the driver behind the country’s devastating and deadly second covid wave. According to a study, vaccines are also eight times less effective against the variant, as compared to the original strain found in Wuhan, China.

The variant is known to have extra transmissibility, as well as causing more severe symptoms in patients. Other countries are now also reporting increasing cases of the variant, including the UK and Israel. According to a recent report, the Delta variant is reportedly responsible for over 90% of recent cases in Israel, which lifted restrictions in June, although around 57% of the population is vaccinated.

The new Delta plus variant has been formed due to a mutation in the Delta or B.1.617.2 variant, first identified in India and one of the drivers of the deadly second wave. Some cases of the ‘Delta plus’ variant of Covid-19, considered highly infectious, have been reported in Maharashtra threatening to massively dent the state’s fight against the virus as experts warn that this variant may trigger a third wave of the pandemic in the state.

According to experts, the Kappa variant, also known as B.1.167.1, is a double mutant strain of the virus that has raised red flags and prompted global gene surveillance to check for its prevalence and propagation. The double mutation is a distant lineage since it consists of two viral types. The E484Q mutation, which is identical to the E484K mutation identified in the fast-spreading Brazilian and South African variants of concern, is one of them. It also contains the L452R mutation, which allows the virus to evade our immune system’s natural defense.

The Health Ministry on Friday said the Lambda variant of Covid-19 was still being explored, and had not entered India yet. He said for now, it was a ‘variant of interest’.

On June 14, the WHO designated it as a “Variant of Interest.” In August 2020, the variation was discovered in Peru, and it has since spread to 29 nations, predominantly in Latin America.

The Lambda variation has also made its way to the United Kingdom, where it has been added to the list of variants under research by Public Health England. Because of its significant alterations, such as L452Q and F490S, the variant is worrying. There is currently no proof that the variant causes more severe diseases or renders immunizations ineffective, according to UK health officials.

The B1.617.3 is a member of the B.1.617 lineage, which was first discovered in India. It’s a cousin of the Delta variety B.1.617.2, which was responsible for India’s fatal second wave. So far, no health authority has classified the B.1.617.3 variation as a variant of interest or concern.

Meanwhile, according to a report in the Times of India, the B.11.318 variant features the mutation E484K, which is identical to Kappa, and India has reported two genome sequences of this new variant so far.

8 Asiatic Lions Test Positive in Hyderabad Zoo: Some Facts about...