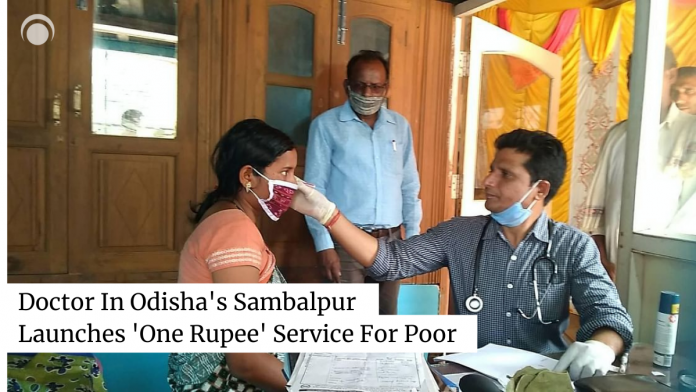 Doctor In Odisha’s Sambalpur Launches ‘One Rupee’ Service For Poor

Last year, Shankar Ramchandani, a doctor based in Odisha’s Sambalpur, started a ‘One Rupee’ clinic to treat the poor who couldn’t afford to pay heavy fees to doctors. But still, the people were facing the problem of the ability to afford the medicines prescribed by the doctor. So, to solve this problem and to further his long-standing commitment to serve the underprivileged, Ramchandani has launched a ‘One Rupee’ medicine service, where medicines are distributed to the needy people who consult him for just Rs 1.

The service was launched on Saturday, 12 February, to commemorate the one-year anniversary of the ‘One Rupee’ clinic, which has been functioning from Burla town’s Kacha Market from 7 am to 8 am and from 6 pm to 7 pm.

Shankar Ramchandani is an assistant professor in the medicine department of Veer Surendra Sai Institute of Medical Sciences and Research (VIMSAR). He provides these services after his regular duty hours and his wife Sikha Ramchandani who is a dental surgeon, is helping him in the pioneering work.

The ‘One-Rupee’ clinic has provided him with an opportunity to serve the poor, destitute, unprivileged, elderly persons, physically challenged people and the people who do not have access to proper medical care. Ramchandani said that hundreds of people regularly come to the OPD of VIMSAR and one can find a long queue of patients to consult doctors. “I have seen elderly people and people with disabilities waiting for hours for consultation with doctors in OPD. They don’t need to wait for hours and suffer at the hospital. They can come to my clinic and get consultation at Rupee 1 only,” he added. He earlier had hit the headlines when he took a leprosy patient carrying on his arms and dropped him in his house in 2019.

Truly, Shankar Ramchandani has set an example before all of us by showing that a small good initiative can bring smiles to many lives. Let this be an inspiration for us to stand out from the crowd and do something that makes everyone happy.

The government of India announced the all-new Information Technology Rules 2021, which include stricter intermediary guidelines for digital media,...