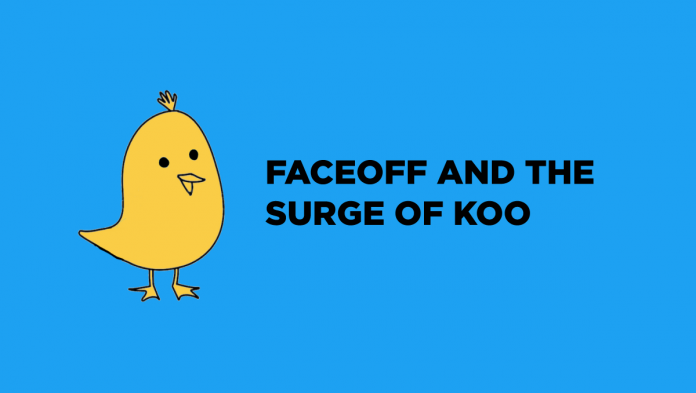 FACEOFF AND THE SURGE OF KOO

The Indian government has asked for social media companies to comply with Indian laws and regulation following a face-off with microblogging site Twitter over suspension of certain accounts sought by the government.

Around 1100 Twitter handles that the government accused of spreading misinformation and inflammatory content associated with the ongoing protests were suspended for a few hours. However, Twitter then unblocked and restored access to 50% of these accounts, after an internal inquiry.

The San Francisco based Social Media Giant permanently suspended more than 500 accounts and blocked access to hundreds of others within India, the company said on Wednesday,

Among the actions undertaken by Twitter, included the suppression of hashtags containing harmful content, the company “withheld a portion of the accounts identified in the blocking orders” within India, making them accessible only outside the country’s borders in order to come into compliance with local law.

The company said, they were “actively exploring options under Indian law” both for its own practices as well as for the impacted accounts. While complying to the order, the company is yet to act on accounts of news media entities, journalists, activists reiterating its policy to prioritize providing free expression.

“India’s Ministry of Electronics and Information Technology, MEITY, had first directed the microblogging platform to remove more than 250 accounts and this week added over 1,000 more under the rules of the Information Technology Act, which allows such actions in the interest of the country’s sovereignty, defense and security,” reported Bloomberg.

Amidst this ongoing tussle between the tech Giant and the Government that may also lead to a legal re-course, an alternative Indian app has surged in popularity.

Known as Koo, the downloads of the app have surged 10-fold in the past two days to over 3 million. Meanwhile, #kooapp was the top Twitter trend in India on Wednesday with nearly 21,000 posts, followed by #BanTwitter.

Aprameya Radhakrishna and Mayank Bidawatka, are two MBA graduates who founded of Koo – an Indian app very similar to Twitter with a logo of yellow bird more than a year ago. It allows users to use hashtags (#) or the “@” symbol for mentions. The app also allows users to ‘re-koo’, Koo’s version of a retweet and chat instead of a direct message.