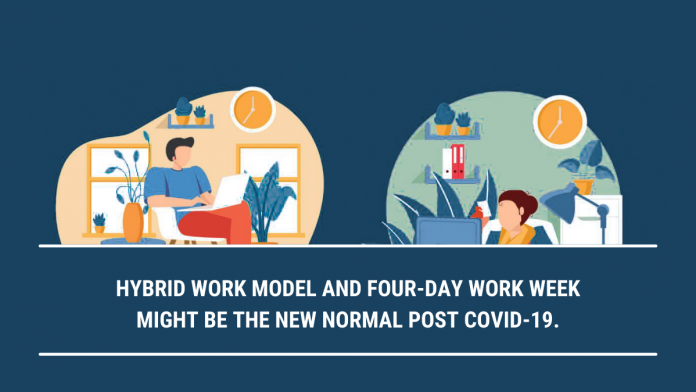 There have been lots of changes in our lives since Covid-19 pandemic started in 2020, and work culture is one of the major sectors that have been impacted by it. Covid-19 cases have dipped significantly as India vaccinated more than one crore citizens as of Friday and in a situation like this, top IT companies like the Tata Consultancy Services (TCS), Infosys, HCL Technologies and others have revealed plans to call their employees back to office, ending a more than one year practice of work from home regime. As major employers plan on calling their employees back to office, there have been a lot of discussions surrounding it and a four-day work week might emerge as one of the results of it.

Some companies, including those in India, have already shifted to a four-day work week to ensure a healthy work-life balance for their employees. San Francisco-based cyber security company TAC, which has its office in India, jumped on board seven months ago to boost productivity, according to reports by news18. The company, located in Mumbai, closes on Fridays to ‘make workers happier and more productive’, according to a statement.

According to a report by CNBC, technology company Bolt became one of the newest organizations to shift to this new model globally. The report said that a campaign under 4 Day Week Global is also urging more employers to hop on to this model.

“We are changing the model of work away from measuring how long you are at the office, and moving that towards what are people actually producing and what outcomes are we trying to achieve over the course of the week,” CNBC quoted Joe O’Connor, global pilot program manager, 4 Day Week Global, as saying.

Apart from this, many IT companies are also considering moving to the hybrid work culture where employees can work from home on certain days of the week, and from office on the others. India’s biggest IT employer Tata Consultancy Services or TCS has, in this regard, announced a 25×25 vision for the year 2025. Under this policy, only 25 percent of TCS’ five lakh employees across the globe will be at their offices at any point of time, while associates will spend only 25 per cent of their time in the office. The company plans to co-locate only 25 per cent employees within each project under this plan, which came into the spotlight when Rajesh Gopinathan, CEO, TCS, talked about it while announcing the FY20 annual report of the company.

Meanwhile as far as four-day work week is considered, as per reports, the Indian government also has plans to implement the policy across the country. New labor codes, set to be implemented in the near future, would allow companies to have the flexibility to reduce the number of working days to four per week; Labour and Employment Secretary Apurva Chandra said in February.

However, the working hours, which are fixed at 48 hours per week, will remain ‘sacrosanct’, the official had said. This means, in India, if the policy comes into place for the majority of the companies, employees will have to work for 12 hours a day.

The hybrid work model is another option employers are seriously considering. This
model offers a flexible location arrangement to the workers as per their fit. Not only TCS, but Google CEO Sundar Pichai also aims to make this the norm in the pod-Covid office scenario. In a letter to employees earlier in the year, he stated that the company will follow a hybrid work model in the future. He had said this is a model wherein around 60 per cent of the employees would come together in the office a few days every week, another 20 per cent would work in new office locations, and the remaining 20 per cent would work from home.

Meanwhile, IT service provider HCL Technologies has already started asking its senior employees to come to office at least twice a week, while others must attend office once a week as per requirement. “We do expect momentum to increase by the end of this calendar year. This is the policy that we have at this point of time,” Apparao VV, chief human resource officer of the company said.

International Day for elimination of violence against women