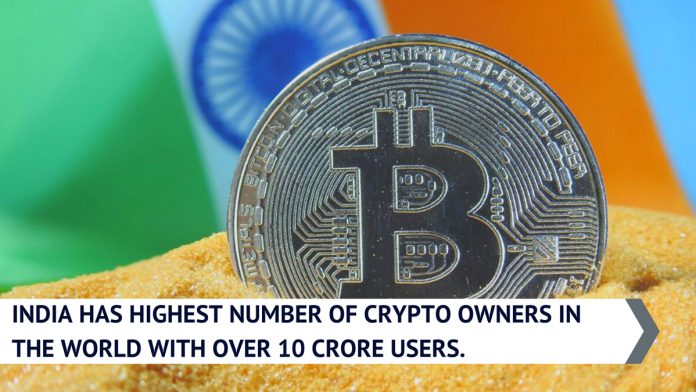 In an annual proliferation index, Broker discovery and comparison platform BrokerChoose, has revealed that India, with 10.07 crore users, has the highest number of individuals owning cryptocurrency globally. The United States is next in line with 2.74 crore crypto owners, followed by Russia with 1.74 crore and Nigeria with 1.30 crore. Due to a higher population than the US and Russia, India stands fifth in terms of crypto ownership rate with 7.30 percent in the world. Crypto ownership rate refers to the percentage of people out of the total population of the country who own cryptocurrency. According to the report, the crypto ownership rate is highest in Ukraine with 12.73 percent, followed by Russia with 11.91 percent, Kenya with 8.52 percent and the US at 8.31 percent.

In 2018, the Reserve Bank of India banned the trading of cryptocurrency that was later quashed by the Supreme Court. Earlier this year in February, the government of India drafted the Cryptocurrency and Regulation of Official Digital Currency Bill, 2021 to ban all private cryptocurrencies in the country and a committee was later formed to provide suggestions on it.

The report by BrokerChoose also revealed country-wise searches about cryptocurrencies. The US topped the list with most crypto-related searches. India, the United Kingdom and Canada followed the trail. According to a report by Mint, industry trends show that most of the crypto owners that are contributing are young people from tier 2 and tier 3 cities, apart from the metropolitan cities.

The rise in crypto owners coincides with the popularity of popular crypto coins like Bitcoin. The cryptocurrency has given 50 per cent returns since the start of the year.