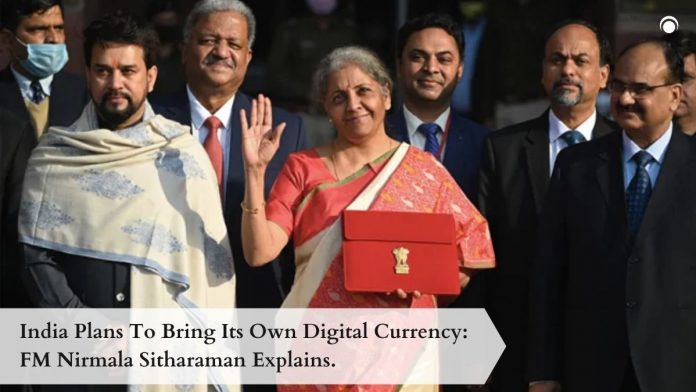 On Tuesday, Finance Minister Nirmala Sitharaman proposed in her Budget 2022-23 speech that the Reserve Bank of India (RBI) will introduce digital currency in the next financial year beginning April 2022 to boost the digital economy and efficient currency management.

In an exclusive interview with Rahul Joshi, Group Editor-in-Chief, Network18, Sitharaman said that India’s very own virtual currency by the country’s central bank will be introduced sooner rather than later. She also said that Rs 1 lakh crore financial assistance to states will be provided in 2022-23 to catalyse investments and states will be allowed a fiscal deficit of up to 4 percent of GSDP (Gross State Domestic Product).

RBI Governor Shaktikanta Das said that Cryptocurrencies are a serious concern to RBI from a macroeconomic and financial stability standpoint.

Explaining the growth trajectory of the country, Sitharaman said that exports are growing. “Export potential is there for private sector investment. Newer capacities are definitely going to come in,” she said.

On blended finance, she said that the government-backed Funds NIIF and SIDBI Fund of Funds had provided scale capital, creating a multiplier effect. Also, for encouraging important sunrise sectors, such as climate action, deep-tech, digital economy, pharma and agri-tech, the government would promote thematic funds for blended finance with the government share being limited to 20 per cent and the funds being managed by private fund managers.