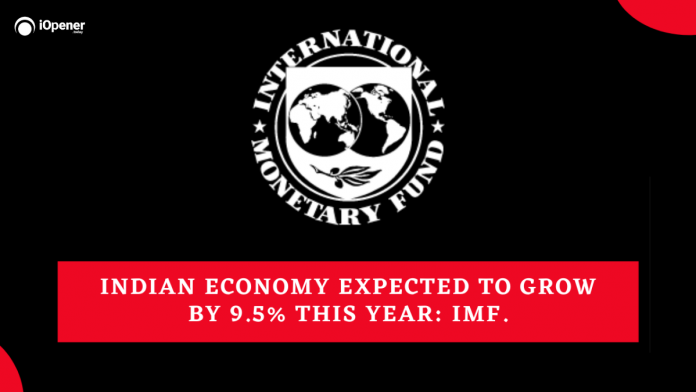 The International Monetary Fund (IMF) has retained its projection for India’s economic growth at 9.5 per cent for this year according to latest projections released on Tuesday. India’s growth projection released by the latest World Economic Outlook remains unchanged from its previous WEO (World Economic Outlook) update of July this summer but is a
three-percentage point in 2021 and 1.6 percentage point drop from its April projections.

Meanwhile, the IMF has moderately scaled down its forecast for the world economy during 2021 by 10 basis points to 5.9 per cent in view of worsening Covid-19 dynamics and supply disruptions and is expected to be 4.9 per cent in 2022.

India will again be the fastest-growing large economy in the world, both in the financial year 2022 and 2023. In the year 2020, China was the only major economy that had registered growth. While China’s economy had grown 2.3 per cent last year, India’s had contracted by 7.3 per cent.

IMF Chief Economist Gita Gopinath said recent developments had made it clear that the pandemic was not over anywhere until it was over everywhere. “If Covid-19 were to have a prolonged impact into the medium term, it could reduce global GDP by a cumulative $5.3 trillion over the next five years relative to our current projections. It does not have to be this way,” she said.

“The outlook for the low-income developing country group has darkened considerably due to worsening pandemic dynamics. The downgrade also reflects more difficult near-term prospects for the advanced economy group, in part due to supply disruptions,” the economist added.

“Partially offsetting these changes, projections for some commodity exporters have been upgraded on the back of rising commodity prices. Pandemic-related disruptions to contact-intensive sectors have caused the labour market recovery to significantly lag the output recovery in most countries,” she added.

While observing that the dangerous divergence in economic prospects across countries remains a major concern, she said aggregate output for the advanced economy group is expected to regain its pre-pandemic trend path in 2022 and exceed it by 0.9 per cent in 2024.

“Output for the emerging market and developing economy group (excluding China) is expected to remain 5.5 per cent below the pre-pandemic forecast in 2024, resulting in a larger setback to improvements in their living standards, ” she added.

Stressing that a principal common factor behind these complex challenges is the continued grip of the pandemic on global society, Gopinath said that the foremost policy priority is therefore to vaccinate at least 40 per cent of the population in every country by end-2021 and 70 per cent by mid-2022.

“This will require high-income countries to fulfill existing vaccine dose donation pledges, coordinate with manufacturers to prioritise deliveries to COVAX in the near-term and remove trade restrictions on the flow of vaccines and their inputs, ” she said.

The Essence of Gratitude