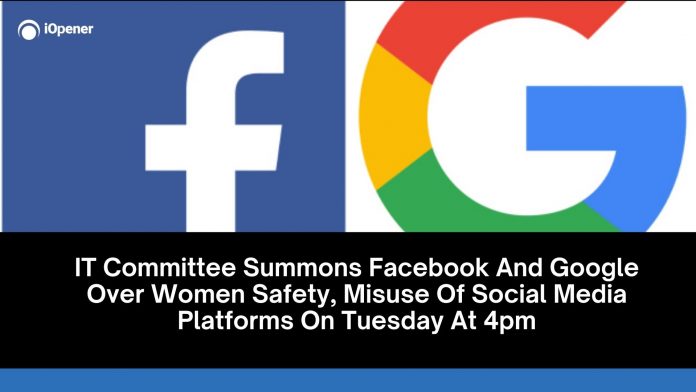 The Parliamentary Standing Committee for information and technology will be meeting on Tuesday at 4 pm to discuss the issue of the safety of women on social media and how to prevent its misuse.

The meeting will be held at the Main Committee Room, Parliament House Annexe in presence of committee members, officials of Ministry of I&T and the representatives of Facebook and Google. Senior Congress leader and Lok Sabha member Shashi Tharoor is the Chairman of the committee. The committee consists of 31 members including 21 from the Lok Sabha and 10 from Rajya Sabha. Representatives from microblogging site, Twitter are not going to be present for the meeting.

The meeting schedule mentions that the committee is to hear the views of representatives of Facebook India and Google India on the subject Safeguarding citizens’ rights and prevention of misuse of social online news media platforms including special emphasis on women security in the digital space.

The committee in its last meeting had called Twitter to present its view on the matter. In that meeting, Twitter defended its stand saying that they were taking all the necessary action to ensure women’s safety and they had a strong policy in place. However, the argument took a different term when MPs across the platform slammed Twitter for not following the guidelines set up by the central government.

On June 20, India’s permanent mission at the United Nations had clarified that India’s new IT rules are “designed to empower ordinary users of social media” and that they were finalized after the government held broad consultations with civil society and other stakeholders in 2018. The Central government has framed the Information Technology (Intermediary Guidelines and Digital Media Ethics Code) Rules, 2021 (‘new IT Rules’) and notified the same on February 25 this year. The Rules came into effect from May 26.

On June 14, the National Commission For Protection of Child Rights (NCPCR) sought a report from Twitter, WhatsApp, Facebook, and Telegram regarding posts on these social networking sites offering illegal adoption of children orphaned amid ongoing Covid-19 pandemic.

The apex child rights body has also directed these four social media entities to submit their report within 10 days and also warned them to take strict action against them if they fail to report such posts.

In a letter written to these social networking sites, the NCPCR suggested if any person posts any such content, an immediate report should be sent to the commission or law enforcement authorities or state commission with a detailed IP address of the user.

Google has just released the second beta for Android 12 which brings new features like the new privacy dashboard,...
General News

Tech giant Google is in process of strengthening the privacy measures for Android phones which will make it harder...
General News