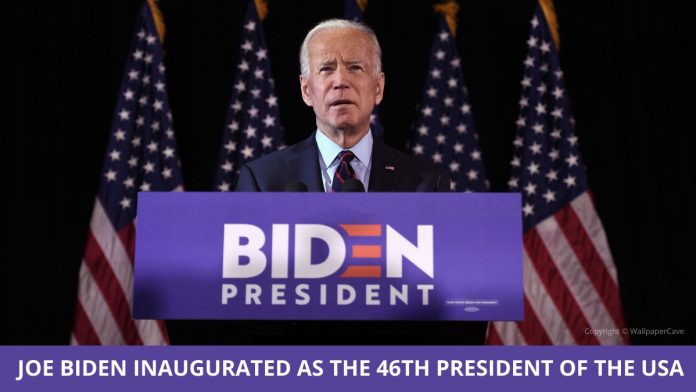 At about 11 minutes before noon on January 20, 2021 Joseph Robinette Biden Jr was sworn in as the 46th President of the United States, with Kamala Devi Harris sworn in as the Vice President of the United States in a historic inaugural ceremony marking the beginning of the Biden-Harris administration, and of course bringing to a closure one of the most tumultuous presidencies in recent times, that of outgoing President Donald Trump.

Vice President Mike Pence and Second Lady Karen Pence did make an appearance, as did all the living former Presidents & First Ladies barring Jimmy Carter, due to health issues.

The 59th inaugural of the United States of America was in stark contrast to the earlier ones, as corona virus and the security detail meant that there were around a 1000 VIPs in attendance and no general American public. A ‘field of flags’ stood fluttering in the national mall representing the hundreds and thousands of Americans who couldn’t be there physically.

One of the most conspicuous breaks from tradition was the absence of now former President Donald Trump, who chose neither to welcome the new President into the White House nor grace his inaugural, like every other president barring three have done in a show of solidarity, grace, and symbolizing the peaceful transition of power.

Following the oath, President Biden delivered his first address to the nation, and sought to bring about unity and healing to a nation fractured by deep racial, political, and economic divides, and battered by the corona virus pandemic – 400,000 of them dead at the latest count.

“A day of history and hope. Of renewal and resolve. Through a crucible for the ages America has been tested anew and America has risen to the challenge.
“Today, we celebrate the triumph not of a candidate, but of a cause, the cause of democracy,” he began.

Unity, he underlined, was required now more than ever. And he urged his detractors to hear him and give him a chance.

“To all those who did not support us, let me say this: Hear me out as we move forward. Take a measure of me and my heart. And if you still disagree, so be it.
“The right to dissent peaceably, within the guardrails of our Republic, is perhaps our nation’s greatest strength.

“And I pledge this to you: I will be a President for all Americans,” he assured those who disagree with him.

Following the inaugural festivities, President Biden was joined by the former Presidents & First Ladies at the Arlington National Cemetery to lay a wreath at the tomb of the unknown soldier.

Upon his arrival at the White House and Oval Office, Biden got right down to work as he signed a raft of executive orders, memorandums, and directives to agencies – undoing some of Donald Trump’s controversial policies.

“There’s no time to start like today,” Biden told reporters in the Oval Office as he began signing a stack of orders and memoranda.

“I’m going to start by keeping the promises I made to the American people.”
Making masks mandatory, re-joining the Paris Climate Change agreement, reversal of the Muslim travel ban, and halting construction of the border wall were some of the key items on the agenda for the new President on his first day in office.