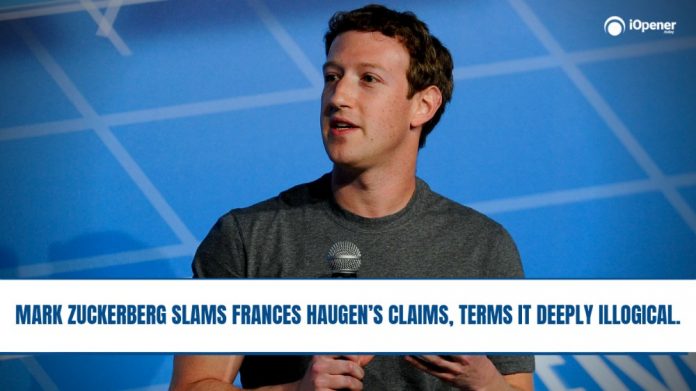 Facebook CEO Mark Zuckerberg said the claims were “deeply illogical” while hitting back at the testimony of Frances Haugen, Facebook whistleblower, a former employee, who claimed that the social media giant fuels division, harms children and needs to be regulated.

“The argument that we deliberately push content that makes people angry for profit is deeply illogical,” Zuckerberg said in a post, hours after a whistleblower testified before US lawmakers.

“I don’t know any tech company that sets out to build products that make people angry or depressed. The moral, business and product incentives all point in the opposite direction.” He added.

“If we wanted to ignore research, why would we create an industry-leading research programme to understand these important issues in the first place?” Zuckerberg wrote in an internal note to Facebook employees, which he later posted on Facebook, questioning Frances Haugen’s claim that the social media giant ignored internal research findings that Facebook and Instagram were harmful for children and public safety as the company prioritized growth over safety.

“At the heart of these accusations is this idea that we prioritize profit over safety and well-being. That’s just not true,” Mark Zuckerberg wrote.

The Facebook founder went on to say the business model of the company was nothing like the picture painted of it by Frances Haugen, whom he did not name in the long post. “We make money from ads, and advertisers consistently tell us they don’t want their ads next to harmful or angry content.” Mark Zuckerberg said.

Haugen called Facebook’s decision “disastrous” for children, public safety, privacy and democracy and urged the lawmakers to “help” the social media giant fix its issues, which, she added, the company cannot do on its own.

To back her allegations, Frances Haugen has given US Congress thousands of documents containing internal research findings, which she also provided to the Wall Street Journal and US market regulators.

Haugen called for “Congressional action” while testifying before US lawmakers at Capitol Hill.

In fact, Haugen went a step further and accused Facebook of fuelling eating disorders and body shaming among young people.

“There are going to be women walking around this planet in 60 years with brittle bones because of the choices that Facebook made around emphasizing profit today,” she claimed.

Meanwhile, Senator Ed Markey declared that Mark “Zuckerberg’s time of invading privacy was over” while asserting that “Congress will take action”.

“We will not allow your company to harm our children, our families and our democracy anymore,” Markey said.

Senator Amy Klobuchar after hearing Haugen testimony said it was a “catalyst for action” as lawmakers sought to seek the next steps in the Facebook privacy row.

Meanwhile, Facebook CEO Mark Zuckerberg’s personal wealth fell by over $6 billion in a few hours after the Facebook outage bringing him down a notch on the list of the world’s richest people, after the social media giant faced an outage of nearly seven hours along with Instagram and WhatsApp. Hours before the outage, a whistleblower came forward and revealed her identity which also likely contributed to the outage. In just a few hours, Zuckerberg’s personal wealth was reduced by over $6 billion. According to the Bloomberg Billionaires Index, this has cost Zuckerberg the fifth position among billionaires. Now, he stands with $120.9 billion in sixth place, behind Bill Gates.