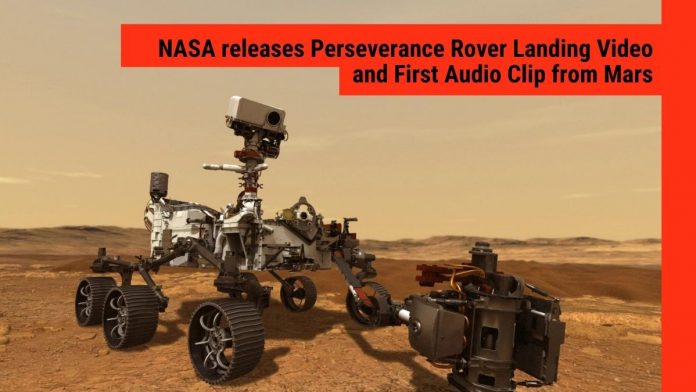 What does the Martian atmosphere sound & feel like? Well, earthlings have now the faintest of glimpse with the release of the the video chronicles of the final minutes of Perseverance Rover’s entry, descent and landing on Mars.

The team at NASA’s Jet Propulsion Laboratory in Pasadena, California, shared these at a news conference on Monday. With the three minute video showing the spacecraft landing on Mars. There’s an enormous red and white parachute open and the reddish brown dust moving up as engines lowered the rover to the planet’s surface.

NASA also released an audio clip recorded by the probe from the Red Planet where we can hear a faint sound of crackling wind and a feeble noise of the rover’s engines.

“What you hear there, 10 seconds in, is an actual wind gust on the surface of Mars picked up by the microphone and sent back to us here on Earth,” said Dave Gruel, lead engineer for the camera and microphone system on Perseverance.

“This is the first time we’ve ever been able to capture an event like the landing on Mars,” said Michael Watkins, director of the US space agency’s Jet Propulsion Laboratory, which is managing the mission.

“These are really amazing videos. We binge-watched them all weekend,” he added.

“These videos and these images are the stuff of our dreams,” said Al Chen, who led the landing team.

Out of the six off-the-shelf color cameras that were devoted to entry, descent, and landing – looking up and down from different perspectives – all but one camera worked. The single microphone turned on for capturing audio during landing failed, but NASA got some audio snippets after landing – the noise of the rover’s engines and wind gusts.

“I am happy to report that Perseverance is healthy and is continuing with activities as we have been planning them,” Jessica Samuels, Perseverance’s surface mission manager said.

Perseverance was launched on July 30, 2020 and landed on the surface of Mars last Thursday at 3:35pm EST near an ancient river delta in Jezero Crater to search for signs of ancient microscopic life.

Its prime mission will last around two years but at the same time is likely to remain operational well beyond that. Perseverance will try to collect rock and soil samples over the next few years in sealed tubes to be sent back to Earth sometime in a decade for lab analysis.

While previous exploration has determined the red planet as habitable, Perseverance’s task is to determine whether the planet was actually inhabited.

“I know it’s been a tough year for everybody, and we’re hoping that maybe these images will help brighten people’s days,” said imaging scientist Justin Maki.