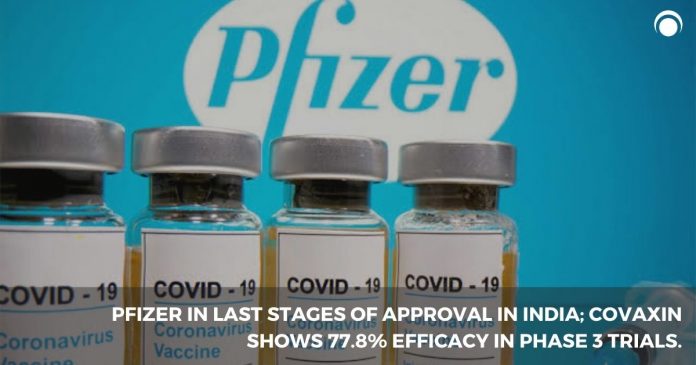 Pharmaceutical giant Pfizer is in the final stages of getting an approval for its Covid-19 vaccine from the Indian government said CEO Albert Bourla on Tuesday. The company is planning to supply one billion doses to India within this year as reported by ANI.

“India went through hell with Covid-19 but the efforts are working. India will receive 2 billion doses, of which, 1 billion this year. We have pledged to provide one billion doses of Covid-19 vaccine this year to nations under the mid and low-income category, including India. We are discussing right now with the Indian government and we are in the very very final stages of finalizing this agreement. First, we need to get approval for this vaccine in India to be able to import.” Bourla said at the USA-India Chamber of Commerce annual summit.

“We are in a good place to get our vaccine approved in India. While the Serum Institute will continue to be the backbone of India’s vaccine plan, we hope to also contribute. Pfizer and Moderna vaccines will provide additional doses to India’s vaccination drive,” the Pfizer CEO added.

Bourla also said that the company had donated some critical life-saving medicines to India at the time of the deadly second wave of Covid-19. He had earlier said that Pfizer is committed to being a partner in India’s fight against the pandemic and is quickly working to mobilize the largest humanitarian relief effort in the company’s history.

Earlier, as per reports the Centre might grant indemnity from liability to Pfizer and Moderna to speed up approvals for the vaccines in India. A health ministry official had said that “there is no issue” in granting indemnity to the two giants in India and the approval will be in line with the approach taken by US and other countries administering both vaccines. Indemnity means protection to vaccine makers from legal proceedings, which ensures they can’t be sued in India.

Bharat Biotech had submitted phase-III clinical trial data of its vaccine to DCGI over the weekend.

However, the data is yet to be published in an internationally recognized, peer-reviewed journal. Bharat Biotech had earlier said the data will be published after it is submitted to the national regulator and will be released within approximately three months.

“It is critical to understand that Phase 3 data will first be submitted to CDSCO (the Central Drugs Standard Control Organization)… followed by peer-reviewed journals with a timeline of approximately three months for publication,” Bharat Biotech had said earlier this month.

Meanwhile Bharat Biotech is set to hold its pre-submission meeting with the World Health Organization (WHO) on June 23rd, Wednesday for the listing of Covaxin. The approval by WHO will make it easier for made-in-India vaccine recipients to travel abroad.

Also the DCGI’s approval of Covaxin’s phase 3 data will help Bharat Biotech secure EUL (emergency use listing) from the World Health Organization (WHO). EUL from WHO will allow Bharat Biotech to export its vaccine and also ease international travel for Indian citizens who have received Covaxin doses.

The vaccine is yet to be recognized by foreign governments and had suffered setbacks after Bharat Biotech was denied emergency use of its vaccines by the US Food and Drugs Administration on 11th June.

The US Food and Drug Administration (FDA) has rejected Bharat Biotech’s proposal for an emergency use authorization (EUA) of...
General News

Around 1 crore healthcare workers and 2 crore frontline workers are expected to be inoculated with the corona virus...