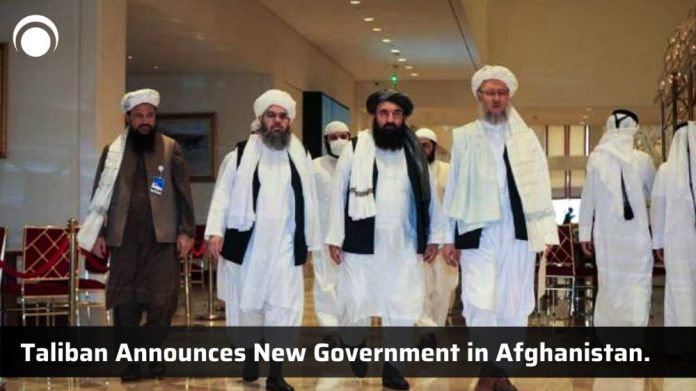 The Taliban on Tuesday announced a new government after taking over Afghanistan last month. In a press conference in the capital city of Kabul, Taliban spokesperson Zabihullah Mujahid said it is just an “acting” government in which Mullah Mohammad Hassan Akhund will be the ‘acting’ Prime Minister. Taliban co-founder Mullah Abdul Ghani Baradar and Mullah Abdus Salam will serve as his deputies.

For now, the group only announced names for key departments such as foreign, defence and interior etc. “Rest of the ministers will be announced in the future when we find the right people to hold the positions,” Mujahid said in the press meet.

However, there was no evidence of non-Taliban in this newly announced line-up, which has been the biggest demand of the international community.

This announcement of the government came hours after the Taliban fired shots into the air to disperse the crowd and arrested several journalists during the anti-Pakistan protests.

Meanwhile, Mullah Hasan is presently head of the Taliban’s powerful decision-making body—Rehbari Shura which serves much like a government Cabinet running all the group’s affairs subject to the approval of the top leader as reported by The Indian Express.

Mullah Hasan belongs to Kandahar, the birthplace of the Taliban, and was among the founders of the armed movement. He worked for 20 years as head of Rehbari Shura and remained close to Mullah Hebatullah. He had served as foreign minister and deputy prime minister during the Taliban’s previous government in Afghanistan from 1996 to 2001.

Sirajuddin Haqqani, the head of the Haqqani network and son of the famous anti-Soviet warlord Jalaluddin Haqqani, will be the new interior minister. Haqqani is a specially designated global terrorist. According to the FBI, the US Department of State is offering a reward of up to 5 million USD for information leading directly to the arrest of Haqqani, who is thought to stay in Pakistan and maintains close ties to the Taliban and al Qaeda.

A day after Afghanistan President Ashraf Ghani stepped down from his post and the Taliban took over control of...