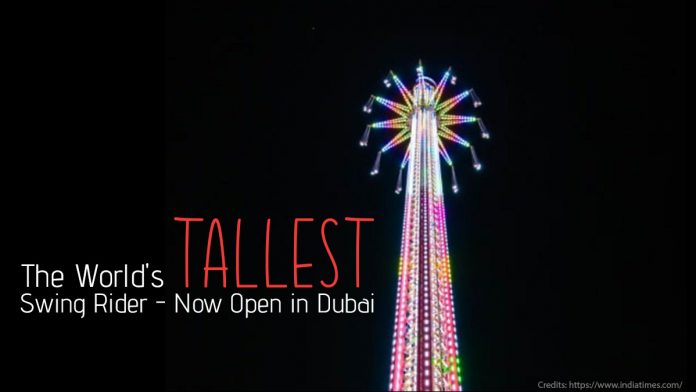 All the amusement park lovers and thrill-seekers out there, you can now add a new ride to your wish list – The Bollywood SkyFlyer, world’s tallest swing rider which is now open in Dubai.

It stands at an impressive height of 460 feet (140 meters), which is the same as that of the Great Pyramid of Giza. With its spectacular height, The Bollywood SkyFlyer took over the top spot from 450 feet tall Orlando Starflyer.

Just like many businesses across the world, the park used the lockdown as an opportunity to expand and renovate.

“We used the time to create and build a brand-new area in the park that we call the Mela Zone, which is home to the majority of the nine new rides at Bollywood Parks Dubai,” Milton D’Souza, general manager of the theme park told CNN.

The Bollywood Skyflyer is made up of 421 tons of steel, took 600 days to build and a further 120 days to install, said D’Souza.

The other new attractions in the Bollywood-themed park include a Ferris wheel, an abra swing ride, a rollercoaster with the theme of India’s iconic yellow and black cabs, ‘Mansoon Masti‘, which will take visitors on a monsoon journey and a free-fall “rocket” drop tower, which will “bring to life the vibrant culture of India,” D’Souza added.

D’Souza hopes that the new additions to the park will attract many tourists in the coming days which will in turn boost the tourism sector of Dubai.

For kids, The ‘Rocket’ simulator is a perfect new addition as it is a space-themed tower ride that they will enjoy without any doubt.

For all those who wish to dive into the tempting flavors of Indian street food and go on a remarkable culinary journey, ‘Namaste India’ will be the perfect spot, which will open soon at Bollywood Parks.

Visitors who wish to shop for clothes and accessories or even souvenirs to carry home can visit the ‘Bollywood Souq Bazaar’, which will be selling a range of souvenirs, handcrafted gifts and much more.

Bollywood Parks is set to break more records in 2021, D’Souza said. Later this year, the park is planning to open the Bombay Express which will be the region’s first and only wooden rollercoaster.