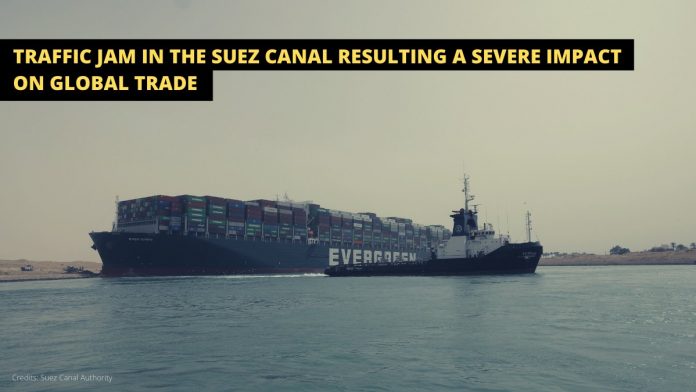 The Suez Canal is currently blocked for traffic after a large cargo ship got stuck sideways across the canal, blocking the path of other ships.

On Tuesday morning, while passing northwards to enter the Mediterranean Sea through the Suez Canal, the ship Ever Given – a Panama-registered container ship ran aground and got stuck sideways across the canal due to a mishap caused by bad weather. It was on its way to Rotterdam in the Netherlands from China. It is the largest vessel to go aground in the Suez Canal.

Evergreen Marine, a Taiwanese transport company that operates the ship said that it was suspected to be hit by a strong wing. “It was suspected of being hit by a sudden strong wind, causing the hull to deviate… and accidentally hit the bottom and run aground. None of the crew members was injured,” the company said.

According to Mark Wong, a spokesman for OOCL, the vessel is carrying cargo for logistics company Orient Overseas Container Line Ltd.

The Suez Canal is one of the world’s most heavily used shipping lanes, carrying over 12% of world trade by volume. It is a human-made waterway and was built in 1869, providing a major shortcut for ships moving between Europe and Asia.

A maritime historian who spoke to the BBC said that incidents such as this are rare, but can have massive ramifications for global trade when they happen.

The Suez Canal Authority (SCA) was trying to re-float the Ever Given using rescue and tug units. Diggers are also trying to free the ship from the canal’s bank. It could take several days remove the ship and make the canal fully functional again. The alternative route between Europe and Asia around Africa is a week slower than the Suez route so a daylong blockage could have a severe impact on global trade.

On Wednesday, tugs and diggers failed to dislodge the massive container ship stuck in the Suez Canal. The ship’s manager said that the Dredgers are still trying to loosen the vessel before any attempt to pull it out.

Freeing the ship may not come until Sunday or Monday, when the tide will reach a peak, according to Nick Sloane, the senior salvage master for Fort Lauderdale, Florida-based Resolve Marine Group.

Shoei Kisen Kaisha said it was trying to resolve the situation as soon as possible. “In co-operation with local authorities and Bernhard Schulte Shipmanagement, a vessel management company, we are trying to refloat [Ever Given], the but we are facing extreme difficulty. We sincerely apologise for causing a great deal of worry to ships in the Suez Canal and those planning to go through the canal,” he mentioned.

Experts say that the salvage efforts might work when the tides gets stronger early next week. If attempts to free the ship fail, one of the options would be to unload part of its cargo. But that would take a long time too.

Peter Sand, chief shipping analyst at BIMCO, told the BBC that the delayed vessels were not only container ships, but oil and gas tankers and bulk carriers transporting grain supplies.

“We may see production stop at conveyer belts in Europe shortly,” he warned.