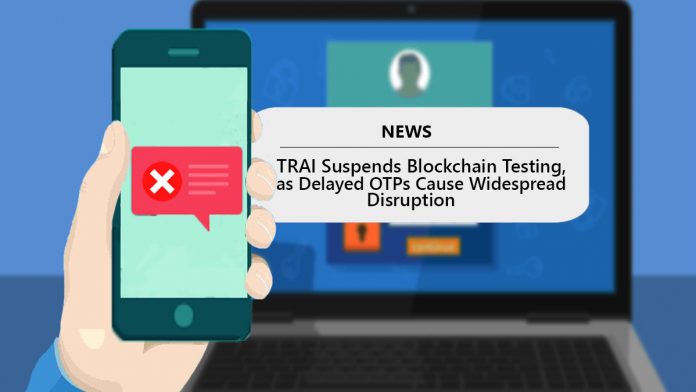 The Telecom Regulatory Authority of India (TRAI) on Tuesday decided to temporarily suspend the Telecom Communications Customer Preference Regulations (TCCCPR), 2018 that were aimed to reduce spam SMS messages. The suspension comes due to the massive disruption in SMS services that troubled a large number of people in the country, people familiar with the matter informed Gadgets 360. The telecom operators implemented the new Distributed Ledger Technology (DLT) process to comply with the new regulations. However, that move made it difficult for people to receive one-time passwords (OTPs) over SMS messages and affected processes ranging from CoWIN registration and debit card transactions to two-factor authentication and online account logins.

Industry sources confirmed to Gadgets 360 that TRAI is suspending the TCCCPR owing to OTP issues faced by lakhs of Indians on Monday. According to a source, OTP APIs that were affected are “going to be back to working soon.” He added that most of the OTP systems are already back to normal and the rest will be operating fully soon as well.

This is not a permanent rollback, though. This is instead a temporary measure because of the difficulties people are facing.

“People will still have to submit templates of their messages, and this whole process is going to continue, [the suspension of TCCCPR] is only a temporary measure.”

“We are concerned about any customer inconvenience caused and have ordered a 7-day temporary suspension of the SMS scrubbing which was activated on Monday,” TRAI said in a statement.

Many affected people were outraged for not receiving OTPs due to the updated DLT process. Some banks and other organisations also provided clarification to users about the hiccups being faced while getting OTPs over SMS messages.

The technical glitch was just a pain for private players — like Axis Bank, Paytm, Goibibo and others — but also for government entities like the Indian Railway Catering and Tourism Corporation (IRCTC), the State Bank of India ( SBI) and Aadhar Authentication, who saw their messages getting blocked out.

“We are unable to reach the authentication service to serve you OTP. Please try again,” it said on the Aadhar service’s official website.

This whole confusion is unfolding because the Telecom Regulatory Authority of India (TRAI) started to implement the second phase of the SMS regulations on March 8. The transition has been less than smooth to say the least, with companies who may not have registered in time getting locked out.

The government’s new process is designed to curb spam and fraud messages. Using a blockchain-based solution, telecom operators can now verify commercial messages and their source using a template for such communication.

Unregistered messages, which do not follow the template, will be blocked as potential fraud. And, that’s what’s happening to your OTPs.

Telecom operators are defending the digital ledger system and pointing the finger at companies who failed to register in time. According to them, the onus lies on telemarketers and individual businesses to comply with the standards.

Safer or temporarily more at risk than usual – content scrubbing is a good move to keep spam at bay. But, what’s not good is when a pesky filter keeps useful messages from coming through as well. In fact, such a move could put users more at risk.

“Close to 50% traffic is getting dropped because of content scrubbing. Officials from India’s top banks including HDFC and SBI are extremely furious and dialling TRAI to address the mess at the earliest,” a top executive at a leading telemarketing firm told The Economic Times.

Without messages coming through from your bank, not only do your own transactions hit a wall but there’s no alert if someone else is trying to make a transaction from your account. This increases the chances of cyber fraud.