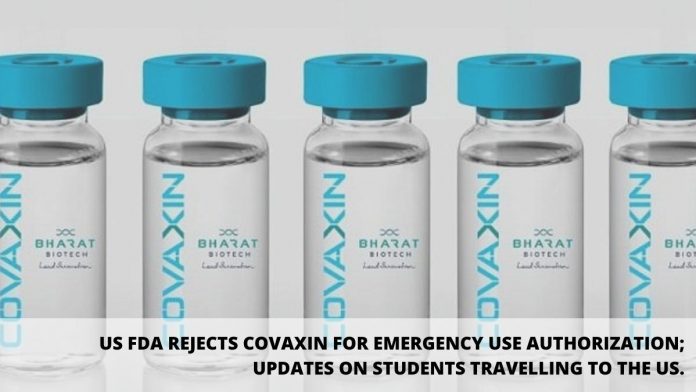 The US Food and Drug Administration (FDA) has rejected Bharat Biotech’s proposal for an emergency use authorization (EUA) of its covid vaccine. Ocugen, the US partner of Bharat Biotech said the company will now be seeking a full approval of Covaxin. This comes after the US FDA asked the company to launch an additional trial so that the company can file for a Biologics Licence Application (BLA), which is a full approval rather than just an emergency one.

“The FDA provided feedback to Ocugen regarding the Master File the Company had previously submitted and recommended that Ocugen pursue a BLA submission instead of an EUA application for its vaccine candidate and requested additional information and data,” Ocugen said in a statement to the NYSE.

“While this will extend our timelines, we are committed to bringing Covaxin to the US.” Shankar Musuniri, chief executive of Ocugen said, adding that the company is in discussions with the FDA on the additional documents required to clear its application.

However, at present, several countries do not recognize the Bharat Biotech vaccine, and those who have received two doses of the vaccine are considered “unvaccinated” in some countries.

Meanwhile Niti Aayog (health) member VK Paul during the press briefing of the Union health ministry on Friday said India welcomes their decision, and that every country has its own benchmark for such approval. But as India’s drug regulator was satisfied with the data that the Hyderabad-based vaccine maker produced, the FDA’s decision will have no bearing in India. “We are happy as we have gone through their safety data,” Dr Paul said. He also expressed hope that the vaccine maker will comply with what the FDA has wanted.

“Every country has a different regulatory system. The scientific framework might be the same but nuances change depending on the context. They have their own parameters which we respect. Our regulatory authorities too have separate parameters. When our vaccine makers make vaccines for our children, the nutritional status, the genetic background are taken into account to find out whether the vaccine will be fully effective. If one vaccine is effective on our children, it may not work in Argentina. That is a different cohort of people,” Dr Paul added.

Also, the vaccine is still going to be reviewed by the US FDA under a standard approval process that may take time. Meanwhile, Bharat Biotech has also submitted an application for an Emergency Use Licence from the World Health Organization, which it expects will come between July and September this year.

It is expected that this would ease any potential restrictions that could arise in the US for those who have been vaccinated with Covaxin.

Meanwhile, there is a growing concern among Indians who have taken the Covaxin jab whether it would be recognized for travel abroad. There is an even greater concern among Indian students bound for the US, who face the prospect of re-vaccination or to “restart” their immunization on their campus for want of a WHO approval for the Bharat Biotech COVID-19 vaccine.

US CDC guidelines clearly state: “People are considered fully vaccinated: 2 weeks after their second dose in a 2-dose series, such as the Pfizer or Moderna vaccines, or 2 weeks after a single-dose vaccine, such as Johnson & Johnson’s Janssen vaccine. If you don’t meet these requirements, you are NOT fully vaccinated.”

It also states that the “guidance can also be applied to COVID-19 vaccines that have been authorized for emergency use by the World Health Organization (e.g. AstraZeneca/Oxford).”

Going by the guidelines, Covaxin vaccination so far does not meet US criteria of fully vaccinated. However, that will not prevent students from travelling to their campuses. They will need a negative RT-PCR report of 72-hours for travel.

An emergency approval from the WHO will allow the company to export its vaccines, besides granting the much-needed validation that is required for the vaccine to be considered as part of a “vaccine passport.”

Meanwhile, vaccine passports or immunity passports are becoming a reality as countries have started opening their borders for non-essential travel to fully vaccinated individuals.