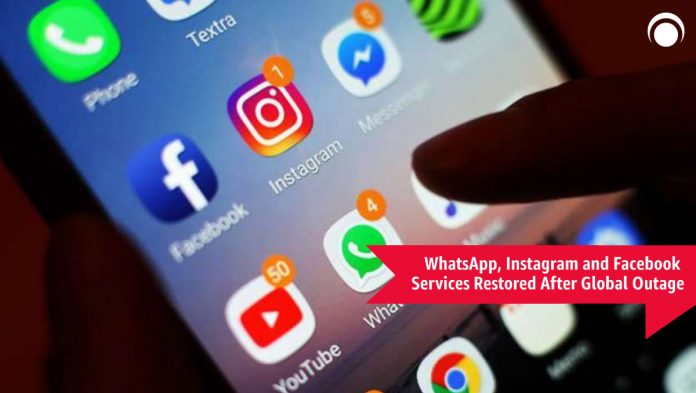 Facebook Inc. owned social media applications WhatsApp, Instagram and Facebook were restored after suffering a brief outage across the globe on Friday night. Many users around the world were unable to send or receive messages. Some users also reported that they failed to even log in to WhatsApp Web.

As per Downdetector, the issue started at around 10:40PM in India and prevented WhatsApp users from sending or receiving messages on the service for more than an hour. On the contrary, WhatsApp is claiming that the service was only down for 49 minutes.

Many users took to Twitter to complain about not being able to send or receive messages on WhatsApp, and many others said they were unable to upload images and videos on Instagram. Some users even complained about having trouble using Facebook, but several others said their app was working fine.

The Facebook-owned applications later said the “technical issue” had been resolved.

“Earlier today, a technical issue caused people to have trouble accessing some Facebook services. We resolved this issue for everyone, and we apologize for any inconvenience,” a Facebook spokesperson told Indian Express.

“Thanks for your patience, that was a long 45 minutes but we are back!” WhatsApp tweeted.

“Some people were having issues with their Instagram accounts earlier, but we’re back now. The issue’s been fixed and we’re sorry for the trouble,” Instagram later tweeted.

According to popular downtime reporting service, Downdetector, more than 28,500 people reported issues with Instagram and over 34,127 users were witnessing problems with WhatsApp.

The service also reported that over 49 percent of WhatsApp users were facing connection issues, 48 percent people were unable to send or receive messages on the platform and 2 percent were not able to log in. Around 57 percent Facebook users reported about total blackout and 29 percent were not even able to access the social media app. Meanwhile, around 66 percent of Instagram users were not able to access the News Feed as well as its official website. Downdetector is a site that monitors outages by collating status reports from users and some other sources.

This is not the first time that the Facebook social media services have been impacted. Last year in December, WhatsApp went out along with Instagram and Facebook for a few hours, before services were restored.

Major Websites go Down Across the Globe due to Fastly Outage.

Many major websites across the globe went down on Tuesday due to an outage in cloud computing services provider...