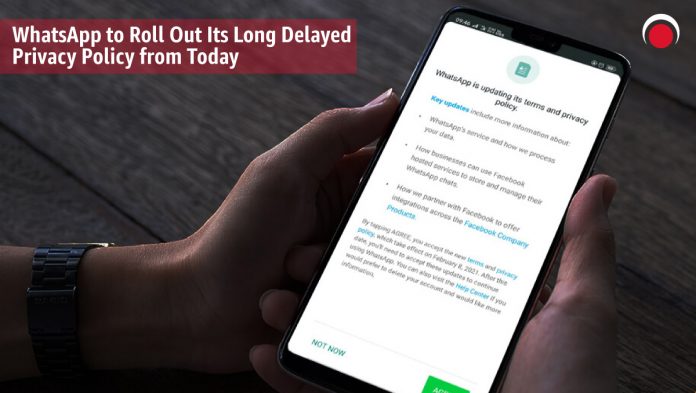 WhatsApp is all set to roll out its new and much-maligned privacy policy starting today. The Facebook owned messaging app had significantly delayed the implementation due to the extensive criticism it received but has finally decided to push through the policy, all though with one tiny change. The change being that WhatsApp has clarified that it would not delete the accounts of users who do not accept the new privacy policy unlike its previous statements. Instead it will not limit some basic features on the app for those who opt out of the policy.

WhatsApp had first informed users about the new privacy policy through an in-app notification back in January 2021, that caused much furore. The company was first supposed to launch the new terms of service on February 8 but considering the surrounding obscurity around it, the company postponed it to the new date.

Even though it might seem fair enough that WhatsApp may not delete your account, and will only limit some basic features. The fine print reveals that users will a lot of basic functionality at some later point. This includes periodic added restrictions to access your chat list, notifications and calls. Thus, while on one hand, WhatsApp claims to not do anything drastic like removing the account, but on the other, it will make the app completely useless if users don’t accept the new privacy policy.

According to WhatsApp, anyone who still hasn’t accepted their new terms of service, ie, WhatsApp “update”, will first be sent persistent reminders to accept the new terms to use the app. While there is no specific window mentioned for the duration these persistent reminders would last or how persistent they would be, WhatsApp says that if you still don’t accept, there will be consequences. Till you accept. First, your access to the chat list within WhatsApp will be restricted, which means you won’t be able to see messages in what is essentially an instant messaging app. If you have notifications enabled on your phone, you’ll be able to see incoming messages in the notification itself and reply from there. You’ll be able to answer incoming WhatsApp voice and video calls for the time being. Eventually that’ll also stop.

“After a few weeks of limited functionality, you won’t be able to receive incoming calls or notifications and WhatsApp will stop sending messages and calls to your phone,” says WhatsApp. There is no specific time frame mentioned for what the ‘few weeks’ would be.

In January this year when WhatsApp first started sending popups to users within the app, to accept the new terms of use, the details of how WhatsApp’s service handles your data as well as how WhatsApp partners with the larger Facebook platform to allow integrations across multiple apps, including Instagram and Facebook Messenger were mentioned. Considering that a lot of user information is shared with other Facebook companies, many users aren’t impressed.

The Competition Commission of India (CCI) said in the Delhi High Court in April that the new privacy policy of WhatsApp would lead to excessive data collection and “stalking” of consumers for targeted advertising to bring in more users and is therefore, an alleged abuse of dominant position. This allegation is however something which WhatsApp has constantly denied.

Just when the city was seeing a staggering number of cases in the second Covid-19 wave and the serving...
Read more
General News

India and New Zealand are all set to lock horns in the finals of the inaugural World Test Championships...
Read more

The IAS Officer who Brought the Second Wave Situation under Control...

A Glimpse of Career Opportunities within Biotechnology -part 1