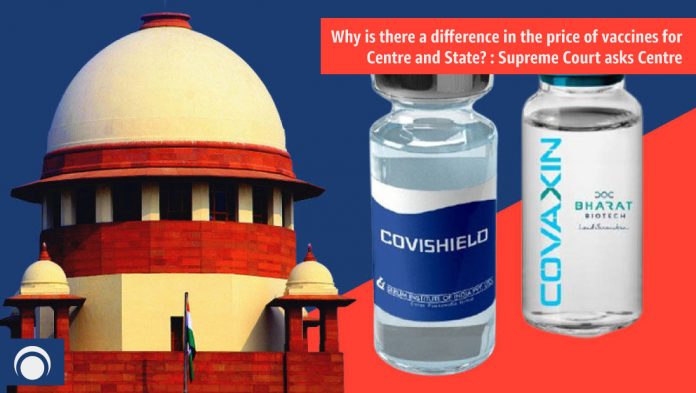 As the Central Government hopes to control the spread of Covid-19 with the new phase of vaccination starting May 1st, which widens the vaccination to all adults, the top court yet again questioned the centre over the pricing of vaccines. “Why is the government not buying 100 percent of doses produced at this time? Why should there be two prices for the centre and the states… what is the rationale?” the Supreme Court asked on Friday.

Earlier, the Centre had changed the vaccine policy to allow states and private entities to buy doses directly from vaccine makers. Manufacturers are free to supply 50 per cent of the doses to states and in the open market. This change in policy, has however, brought the government under criticism.

Country must follow the “national immunization model which we had followed since independence,” the court said. “Pricing issue is extraordinarily serious. How will poor people find money to get vaccinated? We cannot have this private sector model,” the court said. Hostels, temples, and mosques should be turned to Covid centers to tackle the huge spike in cases, the top court suggested.

The Supreme Court on Friday said no state can register a first information report (FIR) or take any action against people appealing for help or putting out their grievances on social media or elsewhere during the coronavirus pandemic. “We will treat this as contempt of our court. Let us hear the voices of our citizens and not clampdown,” the top court said.

An alarming spike in Covid cases in India – hit by a deadly second Covid wave – has led to a deluge of SOS messages on social media as hospitals scramble for resources. “There should not be any presumption that grievances raised on the internet are false,” the top court insisted on Friday.

“It is of grave concern to me as a citizen or (a) judge. If citizens communicate their grievances on social media, we do not want a clampdown on information. Let us hear their voices. We will treat this as contempt if any citizen is harassed if they want bed or oxygen. We are in (a) human crisis,” Justice DY Chandrahud said during the hearing as cases of Covid-19 surged across the country. Even doctors and healthcare workers are not getting beds, he added, calling the situation “grim”.

Meanwhile, last week, Twitter confirmed deletion of several tweets “in response to a legal request from the government”. The posts were deleted for spreading misinformation on Covid, government sources had said.

The Supreme Court also added that the centre has “special responsibility towards Delhi,” stressing that the national capital “represents micro problems of the country”. The Supreme Court told the Arvind
Kejriwal-government that this is “no time for political bickering”, and it should cooperate with the centre.

The Supreme Court said Delhi represents people from the entire country and the Centre has a peculiar role. “Forget that somebody wasn’t able to lift the oxygen but you have to push through because you have to protect lives. You have a special responsibility,” it added.

“The ground situation in Delhi is (medical) oxygen is really not available. Not only in Delhi, but also Gujarat, Maharashtra and Karnataka. What is the effect we are going to see today and the next hearing? How much oxygen you are going to provide to these critical states?” Justice Chandachud asked the centre.

The Supreme Court on April 22 took suo motu cognizance of the “alarming situation” in connection with various health emergencies including oxygen shortage, during the pandemic and issued notice to the Centre seeking a response on the kinds of immediate and effective action it can take to handle such a situation. During the previous hearing, the court asked the Centre to present as to whether a national plan can be prepared to handle the upsetting situation in the country.

Just when the city was seeing a staggering number of cases in the second Covid-19 wave and the serving...

India Tightens The Rules For International Flyers In The View Of...