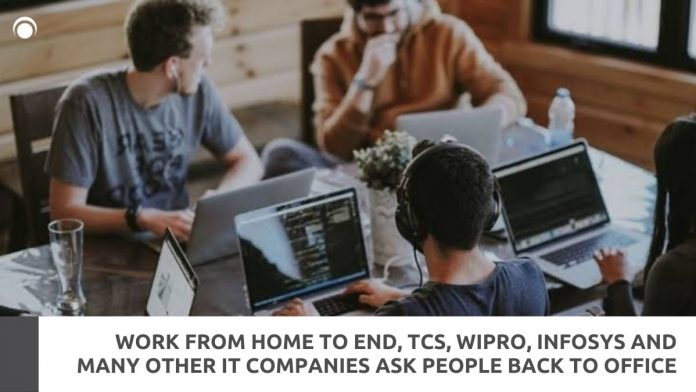 Work From Home To End: TCS, Wipro, Infosys And Many Other IT Companies Ask People Back To Office

As the Covid-19 pandemic raged across the world, work from home became the new normal. But with the number of cases being reported in the country and the world going gone down substantially and India hitting record vaccination numbers in September, corporations are asking their employees to come back to office and to embrace the hybrid style of working, where one is expected to work for 2-3 days from home and another 2-3 days at office.

Wipro Chairman Rishad Premji said that its leaders will start returning to office after 18 months of work from home amid the pandemic. “After 18 long months, our leaders at Wipro are coming back to the office starting tomorrow (twice a week). All fully vaccinated, all ready to go – safely and socially distanced,” Premji tweeted. He also shared a video about the COVID-19-related safety protocols, including temperature checks and QR code scans, that have been put in place at the Wipro office.

Another software company that is going to get back to the pre-pandemic mode of working is Infosys. The company is ensuring the safety of its 2.6 lakh employees, keeping in mind the threat of the third wave of the pandemic in India, as health experts have issued warnings about the inevitability of such a wave. “We have been getting requests from certain accounts to allow their team members to work from Infosys campuses. In addition, some of our employees have also been asking to come back and start working from the office, as a personal preference,” the company stated.

HCL Technologies Chief Human Resources Officer (CHRO) Apparao V V said that currently about 3 per cent of the employees in India are coming to the workplace, while others continue to work from home. He also stated that HCL expects to vaccinate 100 per cent of its employees in the ongoing quarter. Currently, about 74% of its employees have been inoculated.

Another company that has reopened its office for employees is Nagarro. “After 18 months of working from home, we can finally say something that many Nagarrians have long been waiting for! Yes, we are re-opening the Nagarro office in Gurgaon, India. Of course, with all Covid protocols in place,” the company stated.

Even Nasscom has embraced the hybrid work model and has opened its offices for employees to return. The company has announced that it has put in place strict covid protocols and will allow only less than 30 per cent occupancy in office.

Apple is also gearing up to open its offices for employees from this month, in hybrid mode. The company has said that its employees need to work for three days from office. Apple CEO Tim Cook had already proposed the model back in June 2021.