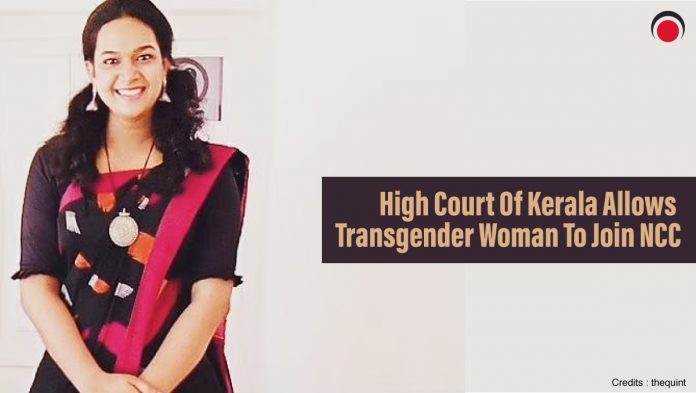 Hina Haneefa, a transgender woman, will now be allowed admission into the National Cadet Corps(NCC) on the basis of her self-identified gender as per the judgement passed by the Kerala High Court on Monday.

Hina had filed her petition in October 2020 with the help of lawyers Raghul Sudheesh, CR Sudheesh, Lakshmi J, Glaxon KJ and Sanish Sasi Raj, challenging section 6 of the National Cadet Corps Act 1948 that only allowed ‘males’ or ‘females’ to join the NCC as cadets and does not mention transgender candidates. She also added in her petition that she was an active member of the NCC during her school days.

“The petitioner who had chosen female gender and had even undergone a sex reassignment surgery and is definitely entitled to enrolment in NCC unit reckoning her as transgender and further as a member of her self perceived gender i.e female,” she said.

The petition states that the petitioner who was assigned male at birth underwent two sex reassignment surgeries and was given the Transgender Identity Card under the Kerala government’s Transgender Policy 2015. Also, apart from declaring section 6 of the NCC as unconstitutional, she also be allowed to participate in the enrolment process as interim relief.

The NCC counsel argued that it is the right of the NCC to decide when transgender persons should be allowed admission. But the bench rejected this argument.

Justice Anu Sivaraman strongly observed that the government is duty bound to comply with the 2014 Supreme Court judgement of NALSA Vs Union of India. The judgment said that the right to dignity as enshrined in the NALSA judgment, 2014 and the Transgender Act, 2019 trumps the NCC’s argument that the latter does not have rules to enroll transgender persons.

The court had directed the NCC unit of the University College, Thiruvananthapuram, to keep vacant one seat when the petition filed by the transgender person against the refusal by the NCC to admit her in the university college unit came up last time.

The denial of enrolment was unsustainable, thus, the court made it clear by saying, “she would be entitled to participate in the selection process on the basis of her application. If she is successful, the petitioner will be enrolled in the NCC Unit”.

Victims’ Voices Lead the Way “Dare to enter the darkness to bring another into the light.”- Tony Kirwan, Destiny Rescue...
Red Letters

A year ago, a man walked into a store to buy cigarettes, the store assistant thought he had used...
Think Why