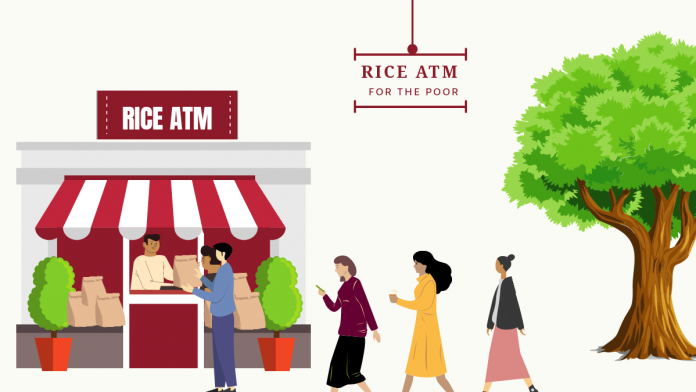 Character, they say, is not made during a crisis; it is only revealed! Ramu Dosapati, from Hyderabad is a living testimony to this adage. As the Corona Virus pandemic gripped the nation and several migrant workers, labourers, and marginalized class found themselves in the throes of poverty & hunger, several individuals came forward as good Samaritans to rescue those in need.

And while many of those who stepped up had vast resources, there were many who did the best they could, with the little that they had. Ramu – an MBA Graduate and a HR executive in a corporate firm, set up a ‘Rice ATM,’ shelling out almost Rs. 50 Lakh from his own savings – something that he had set aside to buy a 3BHK home for his family.

Located in the eastern side of the city of Hyderabad, the Rice ATM has been a boon for the poor and marginalized of the area, especially with several workers losing their jobs, suffering salary cuts, and overall economic crisis.

“I believe that no one should sleep hungry. And that’s the reason I have come up with this initiative. Anyone can come and pick up the rice,” Dosapati told the Times of India.

It all began with Ramu being inspired by the generosity of another security guard, who earmarked Rs. 2000 from his Rs. 6000 salary to help out others. This made Ramu think, “if someone with limited resources could do his bit, then I might as well do a little more!”

Even after the end of the lockdown the Rice ATM has been of help to many, with as many as 100 people availing the facility on 23rd December.

At the height of the pandemic, Ramu did not just make the provision but actively delivered the provisions to several families affected by corona virus.

“Initially, he used to feed 150 migrant labourers with the help of his friends. Once the lockdown-related restrictions were lifted, Dosapati started distributing groceries to needy people- some days only 20 to 30 people come but the count sometimes reaches 150 to 200 people,” added a report by the Business Standard.

That Bernie Sanders memes from the US Presidential Inauguration have taken the internet by storm would be stating the...
General News

Serving incarceration for a wide range of crimes, and often discarded as the worst in the society, the inmates...