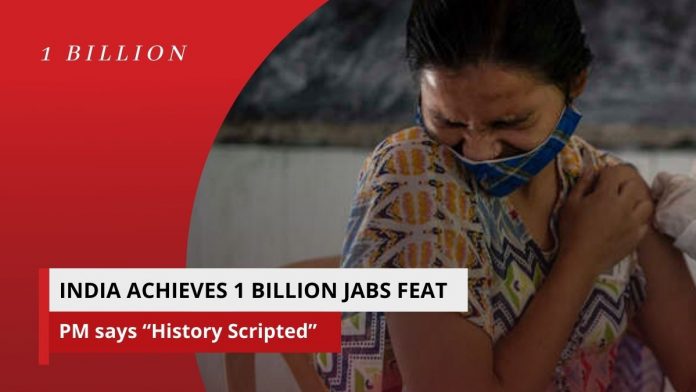 On Thursday morning, India reached the one billion COVID-19 vaccinations milestone. The government wants all of India’s 944 million adults to get vaccinated this year.

The government said that three-quarters of adults in the country of 1.3 billion people have had one shot and around 30 percent are fully vaccinated.

Prime Minister Narendra Modi, who visited the RML hospital in Delhi to mark the milestone, congratulated the country and called it ‘the triumph of Indian science, enterprise and collective spirit of 130 crore Indians.’ VK Paul, NITI Aayog member and chief of the government’s vaccine panel, said that it was remarkable to reach the 1 billion dose mark in just over nine months since the vaccination program started in India.

To celebrate the record, the government plans announcements over loudspeakers on trains, planes, and ships. Union Health Minister Mansukh Mandaviya will launch a song by singer Kailash Kher. The largest national flag, weighing around 1,400 kg, will also be raised at the Red Fort.

The five states that have administered the highest number of doses are Uttar Pradesh, followed by Maharashtra, West Bengal, Gujarat and Madhya Pradesh. Dr Paul pointed out that even though the first dose has been given to over 75 percent of adults, 25 percent remain unvaccinated.

India’s milestone comes months after a huge spike in cases in April and May, when more than 400,000 infections and 4,000 deaths were reported per day and the country’s health infrastructure was overwhelmed. Daily vaccine shots have averaged 5 million this month, a fifth of September’s peak, though states are sitting on record stocks of more than 100 million as the domestic output of Serum Institute of India’s Covishield vaccine soars.

Cases have now sharply fallen, with fewer than 15,000 infections per day, and most activity has returned to normal. Mumbai, where cases peaked in the second surge, recently reported zero deaths in a day for the first time since the pandemic began.