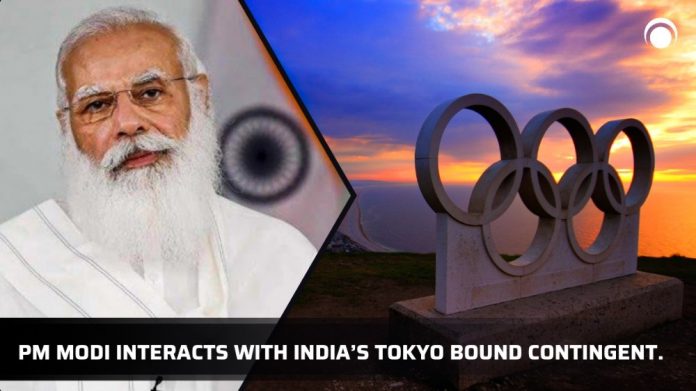 Prime Minister Narendra Modi spoke to Indian sportspersons, who will be representing India in the upcoming Olympic Games in Tokyo on Tuesday. Union sports and youth affairs minister Anurag Thakur, minister of state Nisith Pramanik and law minister Kiren Rijiju were also present during the talks.

PM Modi started the conversation by speaking with archers Deepika Kumari and Pravin Jadhav. Both Deepika and Pravin told PM Modi about their struggles and how they were preparing for the Tokyo Olympics.

After that he spoke to Neeraj Chopra who will be representing India in Javelin throw. He informed the PM about his recovery from a shoulder injury and also his experience of being part of the armed forces and his goal for the Games. PM Modi gave a message to Neeraj to not feel the pressure of expectations and should just focus on giving his 100 percent.

PM then spoke with sprinter Dutee Chand, who will represent the country in the 100 and 200 meters sprints. Chand spoke about the tough challenges that she faced. PM Modi told her that the entire country wants to see her grab a medal in Tokyo.

Then PM Modi asked boxer Ashish Kumar about his fight against Covid-19 and also about losing his father. The boxer then narrated the difficulties that he faced when he tested positive for Covid-19 in Spain. PM Modi compared Ashish’s example with that of cricketer Sachin Tendulkar, who too had played in the 1999 ICC World Cup despite losing his father mid-way through the tournament.

Boxer MC Mary Kom was next interacting with the prime minister. PM Modi told Mary Kom that she is an inspiration for the entire country and that her achievements have inspired many young boxers. Mary Kom told the prime minister about how her kids miss her when she is away representing the country and how she tells them to stay indoors due to Covid-19. PM Modi asked Mary Kom who her idol is. Mary Kom said that she admires legendary American boxer Mohammed Ali.

The PM then spoke with PV Sindhu, 2016 Rio Olympics silver medallist and asked her about the practice at the Gachibowli Stadium. Sindhu thanked the government for helping her get all the facilities to train for the upcoming Games. In reply to a question from the prime minister, PV Sindhu’s father spoke about the need to allow young children to take up sports as it helps in keeping them healthy. He also spoke about the sacrifices that are needed from parents to ensure their children represent the country at the highest level.

PM Modi began his conversation with shooter Elavenil Valarivan in Gujarati. The shooter spent her formative years of training in the state and responded to the PM’s question with a greeting in Gujarati. She spoke about trying different sports as a kid and then choosing shooting as the sport where she wanted to represent the country. Being a college student, Elavenil informed the PM about how she is managing her career in shooting along with academics.

Next, PM Modi asked shooter Saurabh Chaudhary whether he does meditation or yoga to help him concentrate. Chaudhary, India’s top medal contender informed the prime minister about his routine and also asked him about how he manages to keep calm while handling matters related to the country.

After that PM asked Olympian Sharath Kamal, who will represent India in table tennis, to share his experience with young athletes. He asked the athletes to give utmost importance to Covid-19 norms and keep themselves safe. He added on how the scenario has changed in India for professional sports and the kind of importance all sporting disciplines get in the country. PM Modi asked Sharath Kamal to take the role of a senior and guide the youngsters at the Games.

PM then went on to speak to female table tennis player Manika Batra, and appreciated her for teaching the sport to underprivileged kids. PM Modi also asked the young sportsperson about her interest in dancing and how she uses it as a stress buster.

Later, Vinesh Phogat, India’s top female wrestler spoke to the PM next about carrying forward the legacy of the Phogat family and how she battled past the career-threatening injury that saw her limp out of the 2016 Rio Olympics.

Swimmer Sajan Prakash, who became the first Indian swimmer to qualify for the Olympic Games after clearing the ‘A’ standard of international swimming in the 200m butterfly event, interacted with PM Modi.

The prime minister next spoke with Indian men’s hockey team captain Manpreet Singh and asked him about the team sticking together during Covid. PM Modi asked if the team faces any extra pressure due to the country’s elite record in the Games in hockey. Manpreet told the prime minister that the Olympic record serves as an inspiration and does not add any extra pressure.

Star tennis player Sania Mirza was the next in line. PM Modi asked Sania Mirza about the rise of the sport in second and third tier cities. Mirza said that there are a lot of opportunities in the sport as compared to when she picked up a racket. PM asked Mirza about her partnership with Ankita Raina as well. Mirza told the PM that the country’s belief in Olympic sports changed ever since India hosted the Commonwealth Games in 2010.

In the end, PM Modi said that he would have loved to invite all the athletes to his house in Delhi but due to Covid he has had to interact with everyone virtually. He praised the athletes for their hard work in these tough times and asked the country to cheer for the Indian delegation at the Tokyo Olympics.

Australia won the toss and elected to bat first for the iconic boxing day test match at the MCG....