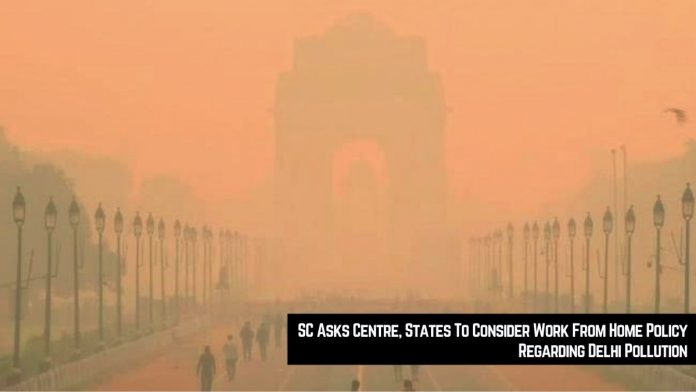 On Monday, the Supreme Court directed the Centre to call an emergency meeting on Tuesday of all stakeholders, including representatives of the governments of Delhi, Punjab, Uttar Pradesh and Haryana to take measures like stopping non-essential construction transport, power plants and implementing work from home.

Earlier, the Delhi government told the Supreme Court that it is ready to take steps such as complete lockdown to control local emissions contributing to the national capital’s spell of heavily polluted air. Solicitor General Tushar Mehta told the court that farm waste burning accounted for just 10 per cent of the emissions on average through the year.

“The affidavit filed by respondents and after hearing we come to the conclusion the major culprits of pollution are construction activity, industry, transport, power and vehicular traffic apart from stubble burning in some parts. Even though some decisions were taken by the Commission for Air Quality Management in the National Capital Region and Adjoining Areas Act has not indicated precisely what steps they are going to take to control factors that are causing air pollution,” a bench headed by Chief Justice N V Ramana said.

“In view of that, we direct the government of India to a call for an emergency meeting tomorrow and discuss the areas which we indicated and what orders they can pass to effectively control air pollution. So far, as stubble burning is concerned, broadly affidavits state that their contribution is not so much except for two months. However, at present a good amount of stubble burning is taking place in Haryana and Punjab,” the bench also comprising Justices D Y Chandrachud and Surya Kant said.

The Delhi government told the Court that it was ready to impose a lockdown but added that such a step would be meaningful if it is implemented across the NCR areas in the neighbouring states. Given Delhi’s Compact side, a lockdown would have a limited impact on the air quality regime. This issue would need to be addressed at the level of airshed involving NCR areas. In view of the above, they are ready to consider this step if the same is mandated for the entire NCR area by the Government of India or by the Commission for Air Quality Management in NCR and adjoining areas.

Schools in the city have been shut for a week and construction and demolition activities have also been banned. On Sunday, Haryana also shut schools in four NCR districts, including Gurgaon and Faridabad.

With the Supreme Court suggesting a lockdown, Kejriwal had earlier said that they are still working out what the value of a lockdown will be and are not imposing a lockdown yet but are preparing a proposal to determine this and will only place it.

“This is not the time to point fingers. Our aim is to reduce the pollution that has increased within the city and created an emergency situation, in order to provide relief to the people. Strict measures are a compulsion and are necessary,” Kejriwal he added.

"Everyone needs a house to live in, but a supportive family is what builds a home."-Anthony Liccione Living in a...
LifeBytes

Ants are small bead-like creatures who keep themselves busy moving around all day long. But all this milling about...

International Day for elimination of violence against women