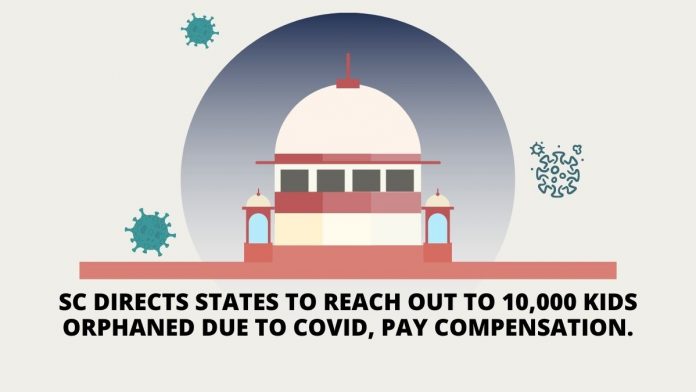 HomeNewsGeneral NewsSC Directs States To Reach Out To 10,000 Kids Orphaned Due To...
NewsUncategorized

SC Directs States To Reach Out To 10,000 Kids Orphaned Due To Covid, Pay Compensation.

On Wednesday, in an effort to provide some help to over 10,000 children who lost both their parents to Covid-19, the Supreme Court directed all state governments to reach out to those kids and pay them compensation. The apex court, which was annoyed over the non-disbursal of Rs 50,000 ex-gratia to the kin of those who lost their lives due to Covid-19, pulled up the state governments and summoned the Andhra Pradesh and Bihar Chief Secretaries virtually to seek explanation during the course of the day. It also issued a show-cause notice to Andhra Pradesh Chief Secretary Sameer Sharma as to why contempt action is not initiated against him for non-compliance of the top court’s earlier order on disbursal of claims.

A bench of Justices M R Shah and Sanjiv Khanna took note of the submissions of petitioner Gaurav Bansal and advocate Sumeer Sodhi that over 10,000 children have been orphaned due to Covid and other reasons since the start of the pandemic and they be compensated. It is stated that in the entire country as per the information uploaded on the Baal Swaraj portal (of NCPCR) approximately 10,000 children have lost both the parent or a surviving parent. It will be very difficult for them to make their application or submit a claim for compensation.

The bench noted from the chart submitted by Additional Solicitor General Aishwarya Bhati, appearing for the Centre, that majority of the states have rejected the number of claims and gave an example of Gujarat (4,234), Maharashtra (49,113), Tamil Nadu (10,138), and Telangana (1,489). The reasons for rejections may be due to incomplete forms of particulars. The bench also directs all concerned states that wherever the claims have been rejected the reasons for the rejection must be communicated to the concerned claimants and they may be given an opportunity to rectify their applications and observe that no claims shall be rejected on technical ground and if there are any lacunae in the application, an opportunity shall be given to the concerned claimants to rectify the mistakes, so that the concerned persons be paid the compensation. The top court added that such particulars of the rejections shall be sent to the applicant as well as the concerned grievance redressal committee within a week from Wednesday.

Approximately 6,400 cases have been rejected and out of the eligible claimants 23,835 have received the compensation and 10,984 claimants are to be paid, out of which 5,141 have been cleared and payments will be made within three days.

The Chief Secretary of Andhra Pradesh has assured the court that the State shall ensure that not a single claimant who is eligible to receive the compensation shall be deprived of the compensation and all efforts shall be made to reach them and compensation is paid. Similar assurance was given by Bihar Chief Secretary and advocate Abhinav Mukerji, appearing for the state government, who said that out of 13,250 deaths recorded, 11,095 claims have been disbursed.

The top court also pulled up Kerala, Gujarat, Maharashtra, Telangana and Jharkhand for their low number of disbursals of claims.