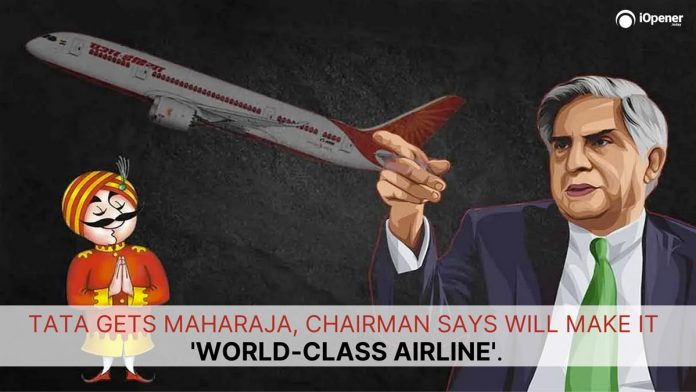 On Thursday, after 69 years, Air India officially returned to its founder Tata Group. After a meeting with Prime Minister Narendra Modi, Tata Sons spokesman said that all the formalities have been completed and the Air India disinvestment process is closed. “We’re totally delighted that this process is complete & happy to have Air India back in the Tata Group. We look forward to walking with everyone to create a world-class airline,” said the Chairman of Tata Sons N Chandrasekharan after taking over Air India.

Department of Investment and Public Asset Management (DIPAM) Secretary Tuhin Kanta Pandey told reporters that Air India has been handed over to Talace Private Limited, a subsidiary of the Tata Group’s holding company. After a competitive bidding process, the government had on October 8 last year sold Air India to Talace Private Limited for Rs 18,000 crore. Air India was started by the Tata Group in 1932. However, after the country got independence, the airline was nationalized in 1953 by the then prime minister Jawaharlal Nehru.

The Tata Group has introduced an ‘enhanced meal service’ at Air India in four flights that will operate from Mumbai on Thursday, officials told news agency PTI. TOI reported that unions are opposing the rule where cabin crew’s BMI and grooming will be checked when they report for flights.

A TOI report stated that the key points finalised by Sandeep Verma and Megha Singhania of Tatas, who will head the inflight service- cabin crew members are important brand ambassadors playing a critical role in brand/image building. They will be welcoming the passengers, addressing and serving the guests. There will be changes in (inflight) announcement, will be intimated, special audio address by Shri Ratan Tata. They added that the crew has to be smartly dressed, adhering to regulations. Grooming associates will be observing the crew for the above. On-time performance is important. All endeavors to close doors at D (departure time) minus 10 minutes.

Meanwhile, the meal service onboard will also be enhanced. Reportedly the caterers have been briefed and they will gradually provide the meals and equipment for the service. The Delhi-Mumbai and key Gulf routes will be among the first to get this rollout along with flights to the US and UK.